CHICAGO - A Hamilton man is facing a felony charge in Chicago for allegedly making up a story about being robbed of tickets to the final Oprah show tapings.

Chicago media reports 44-year-old Robert Spearing told police he was beaten and robbed of the tickets on Tuesday by two men.

But police say he later admitted he had made up the story to avoid telling his wife they had travelled to Chicago without tickets.

Police allege Spearing cut his own forehead with a rock and scraped his hands on the sidewalk to mimic injuries.

Spearing was charged with felony disorderly conduct for allegedly filing a false police report and was ordered held pending a hearing next week.

However, a sheriff's spokesman say a relative has posted a bond to gain the suspect's release. 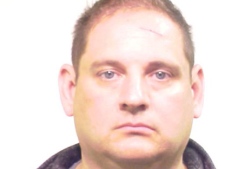 Robert Spearing is seen in this mugshot provided by the Chicago Police Department. Spearing Spearing was charged with felony disorderly conduct for allegedly filing a false police report claiming he was robbed of tickets to Oprah Winfrey's final show.