Toronto police are looking for a man who struggled with a young woman hours before she was found dead in her apartment near York University.

The altercation occurred while the 23-year-old student from Beijing - identified by police as Qian Liu - was in the middle of an online webcam chat with a friend early Friday.

Police believe part of the incident may have been witnessed by Liu's friend, who is overseas.

Less than 12 hours later, police responded to the basement apartment, where they found Liu's body. The cause of death hasn't been revealed and so far police have only classified the death as suspicious.

Liu, a student attending York's English Language Institute, was found naked from the waist down. However, investigators say there were "no overt signs" that she was sexually assaulted and no obvious signs of trauma.

Police say Liu answered a knock at the door during the chat with her friend. A man at the door asked if he could use Liu's cellphone. A struggle ensued.

Police say Liu's friend was able to see the man as he closed the woman's laptop. The computer, believed to be an IBM ThinkPad T400, is missing.

The friend described the man as a tall, white man with a muscular build with medium-length brown hair that was styled messy in the front but neatly groomed in the back. The man was wearing a blue crew neck T-shirt. He is believed to be between 20 and 30 years old.

"Her death is a terrible tragedy and our entire community mourns the loss of a promising student," the statement reads. "The tragic passing of a member of the York community affects us all. I would ask students, faculty and staff to reach out to one another at this very difficult time. " 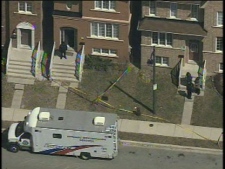 Police on the scene at 27 Aldwinckle Hts. The body of a 23-year-old woman was discovered in a basement apartment Friday morning.