TORONTO - Right-wing juggernaut Rob Ford took his belt-tightening mantra all the way to the Toronto mayor's chair Monday, a victory observers said represents a beachhead for both the federal and provincial Conservatives in the country's most populous city.

The shockwaves were sure to be felt in Liberal Premier Dalton McGuinty's office -- it was his former deputy premier, George Smitherman, who was considered an early favourite to win the Toronto race, but who couldn't compete against Ford.

The scrappy city councillor who tapped into a potent well of voter fury with his promises to cut taxes and kill big spending at city hall took 47 per cent of the vote compared to Smitherman's 35 per cent and deputy mayor Joe Pantalone's 12 per cent.

"This victory is a clear call from the taxpayers, enough is enough," Ford, a lei around his neck, told a cheering crowd of supporters in the city's west end.

"The party with taxpayers' money is over. We will respect the taxpayers again and yes, ladies and gentlemen, we will stop the gravy train once and for all."

The polarizing Toronto race was marred by ugly episodes, including homophobic ads targeting the openly gay Smitherman, and a newspaper article -- later pulled from the Globe and Mail website -- that ridiculed Ford's weight.

Many experts had predicted that a Ford victory could herald a Conservative sweep in next fall's Ontario election.

"It could be a beachhead for a resurgence of Conservative party support in some parts of the city of Toronto, especially some of the inner suburbs of Etobicoke, North York and Scarborough," said Myer Siemiatycki, a politics professor at Ryerson University.

Former Tory premier Mike Harris -- a hero to Ontario's most devout Conservatives and former boss to Ford's late father -- turned up at the mayor-elect's victory party, calling himself a "Ford family fan."

Watson, who served as Ottawa's mayor before a successful foray into provincial politics, took 49 per cent of the vote. Conservative incumbent O'Brien had 24 per cent.

O'Brien's rocky term as mayor of Canada's capital included allegations of influence peddling that forced him to step down temporarily as the matter went to trial. He resumed his duties after being acquitted.

The Toronto race saw Ford tap into the desire for reined-in government spending that Toronto residents were feeling in the wake of the global recession -- similar to what's fuelled the right-wing Tea Party phenomenon in the United States, Siemiatycki said.

If he finds success as mayor, it could be promising for the Ontario Conservatives who are trying to tap that same vein of voter anger, he said. Even Prime Minister Stephen Harper may be reconsidering his prospects in vote-rich Toronto.

"I think (Harper's) probably thinking, 'There may be scope for me in Toronto. There may be hope for a Conservative foothold or breakthrough in Toronto,"' Siemiatycki said.

But if Ford fails to corral a rebellious city council into doing what he promised, that could send voters swinging in the opposition direction, he said.

"If things don't pan out well under Mr. Ford's leadership and administration, then I think it could discredit the Conservative label and ticket and create a sense that this is not a path to be followed at another level of government," he said.

After two terms of majority rule, recent polls suggest that McGuinty's popularity is waning amid voter concerns with pocketbook issues, such as rising electricity bills and his controversial introduction of the harmonized sales tax.

That may have played into the Toronto race, given Smitherman's image as McGuinty's former right-hand man and top enforcer. Along with his "attack-poodle" reputation, Smitherman was dogged by a spending scandal over electronic health records that forced his successor, David Caplan, to resign as Ontario's health minister.

"Differences aside, as a Torontonian who loves my city, I hope for your success Rob," an emotional Smitherman told his supporters, his husband Christopher and adopted son Michael by his side.

"Toronto is too important, there are no boos tonight."

Pantalone -- the left-wing candidate endorsed by outgoing Mayor David Miller -- was curt in his reaction to the night's stunning outcome.

"The people of Toronto have spoken and democracy is beautiful," Pantalone said.

In contrast to the Toronto and Ottawa contests, the race just west of the city in Mississauga had been decidedly uneventful, where feisty Hazel McCallion, 89, won her 12th term as mayor.

"Hurricane" Hazel typically doesn't campaign, put up signs or buy political ads because her continued 31-year tenure in the mayor's seat is considered to be rock solid.

But a conflict-of-interest scandal appeared to put a dent in her staggering support, handing her 76 per cent of the ballots cast rather than the 90 per cent she's been known to command in past elections.

Other interesting races include London, where former Liberal MP Joe Fontana was in a tight race to keep long-standing Mayor Anne Marie DeCicco-Best from winning a fourth term.

In all, there were 444 municipal votes in Ontario. 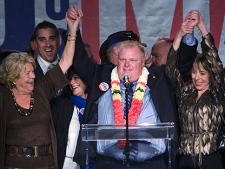 Toronto Mayor-elect Rob Ford, centre, raises his arms with his wife Renata, right, and mother Diane, left, as he speaks to supporters in Toronto on Monday, October 25, 2010. (THE CANADIAN PRESS/Nathan Denette)