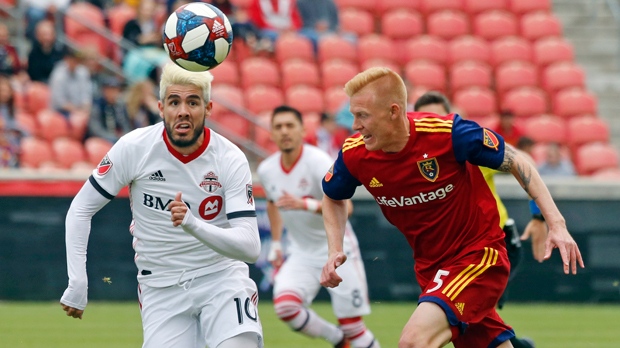 Toronto FC midfielder Alejandro Pozuelo (10) and Real Salt Lake midfielder Kyle Beckerman (5) battle for the ball during the first half of an MLS soccer match Saturday, May 18, 2019, in Sandy, Utah. (AP Photo/Rick Bowmer)

SANDY, Utah -- Sebastian Saucedo had a goal and an assist to help Real Salt Lake beat Toronto FC 3-0 on Saturday.

Damir Kreilach opened the scoring for Real Salt Lake (5-6-1) in the 14th minute, chest trapping Albert Rusnak's cross in the middle of the area and finishing it after deflections off a pair of defenders.

RSL took a 2-0 lead in the 28th minute on Saucedo's goal, a 25-yard shot after dribbling it in to the middle of the field from the left wing.

Jefferson Savarino chased down Saucedo's long ball and cut back on Justin Morrow for an open shot to make it 3-0 in the 60th minute.