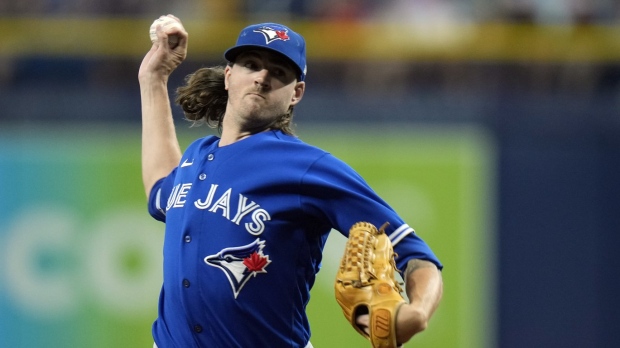 Toronto Blue Jays starting pitcher Kevin Gausman delivers to the Tampa Bay Rays during the first inning of a baseball game Tuesday, Aug. 2, 2022, in St. Petersburg, Fla. Gausman has been named the American League player of the week. THE CANADIAN PRESS/AP/Chris O'Meara

Toronto Blue Jays right-hander Kevin Gausman has been named the American League player of the week.

Gausman picked up the win in Toronto's 3-1 victory at Tampa Bay on Tuesday. He threw eight innings of one-hit ball with 10 strikeouts and one walk.

He followed that performance with six scoreless innings and five strikeouts in the Blue Jays' 3-2 extra-inning win at Minnesota on Sunday.

It's Gausman's first career player-of-the-week award. He is 8-8 with a 2.91 earned-run average in his first season with Toronto.