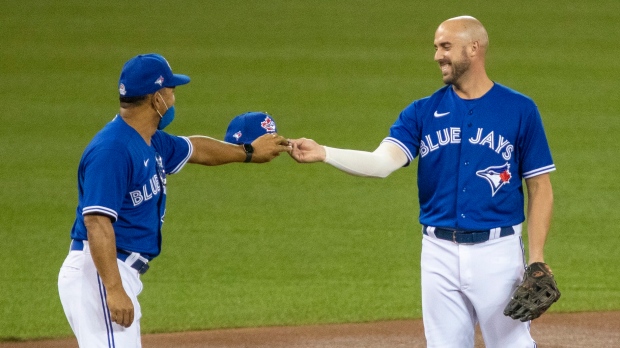 Toronto Blue Jays infielder Travis Shaw has apologized for a series of tweets where he criticized COVID-19 rules and the team's plan to enforce a closed environment at Rogers Centre and adjoining hotel should their Major League Baseball season be played in Toronto.

Shaw told reporters on a Zoom conference call that he was “a little tone deaf” with the tweets last Friday that were “out of frustration” and that he took responsibility for them and didn't want them to become a distraction.

He noted if other teams don't follow public-health guidelines, the season may be derailed in any case.

Shaw had raised concerns about the length of time players may need to stay in their current environment. He replied to a tweet from TSN reporter Scott Mitchell, who reported that multiple sources told him players could face a $750,000 fine and potential jail time if seen outside the ballpark - which also are the same maximum punishments in the Quarantine Act.

“We were told two weeks... not all summer... all summer is a bit much,” Shaw tweeted.

In an email reply, the club said arriving in Toronto, players understood the maximum penalties for leaving the Rogers Centre footprint during camp.

“The rules have kind of changed a little bit from when we first got up here, it was the first I was hearing about that we could be possibly be in here all summer,” Shaw said, adding he should've chosen his words differently.

He explained he'd rented a place one block from the Rogers Centre and had looked forward to taking walks by the water to get away from the game. Living in a hotel was not an ideal situation, he said.

“I was a little bit tone-deaf to the situation, I should have said what I said, should have worded it a little bit differently,” Shaw said. “I apologize for that, take full responsibility.”

The Blue Jays are training in Toronto while figuring out where to play this coming season as the shortened 60-game schedule starts in less than two weeks.

Ottawa has given the ball club the green light to hold training camp in Toronto, but hasn't made a call on games. No fans will be in the stands.

The Buffalo News reported over the weekend the club had checked in with that city about playing in that city, usually the home of the their triple-A club. Blue Jays officials have said Dunedin, Fla., the club's spring-training facility, is the most likely venue for home games if the team can't play in Toronto.

For his part, Shaw said he and his teammates are hopeful Toronto is the club's home this season.

He noted that weather and the COVID situation in Florida means that Dunedin would put the Blue Jays at a competitive disadvantage.

The Blue Jays are slated to open the season July 24 at Tampa Bay. The home opener is July 29 against the Washington Nationals.

Shaw said he doesn't foresee opting out of the 2020 season, given he was looking to this year as a bounce-back season on a one-year contract after an admittedly poor 2019.

Anderson was projected to be a member of the Blue Jays' five-man starting rotation.