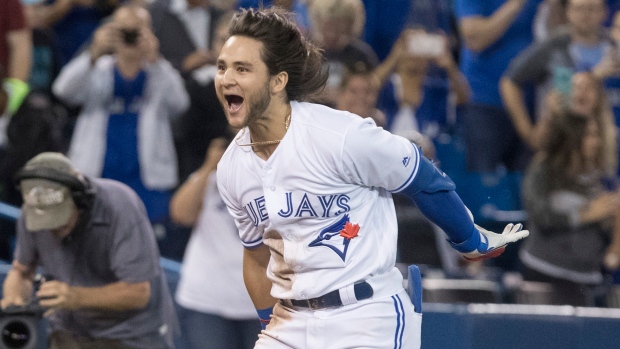 Toronto Blue Jays designated hitter Bo Bichette rounds the bases after hitting a walk off home run to beat the New York Yankees in the 12th inning of their American League MLB baseball game in Toronto on Friday, September 13, 2019. THE CANADIAN PRESS/Fred Thornhill

TORONTO - Bo Bichette led off the bottom of the 12th inning with a towering home run to left field to give the Toronto Blue Jays a 6-5 victory against the mighty New York Yankees on Friday.

Down 5-4, the Blue Jays (58-90) tied the game in the seventh inning. Shortstop Richard Urena led off the inning with a single and advanced to second on a wild pitch from New York reliever Adam Ottavino.

Bichette walked, but he was erased at second base on a force out from Cavan Biggio's ground ball to Yankees first baseman D.J. Mahieu. Urena scored to tie the game when Ottavino balked with a pickoff attempt to first base.

The Yankees (97-52) were without three of their top hitters for most of the game. Aaron Judge was given the night off until he was called upon to pinch-hit in the 12th inning. Font struck him out for the second out of the inning.

The Yankees sent 10 hitters to the plate as part of a five-run fifth inning to take a 5-3 lead. Brett Gardner and Clint Frazier led off the productive frame with back-to-back doubles.

Catcher Austin Romine singled home Frazier to make it a 3-2 game. LeMahieu's sharp single to left field put runners on first and second. But a force out at second on a ground ball to short from Gleyber Torres advanced Romine to third base.

Romine then scored on a poor decision from Toronto rookie third baseman Vladimir Guerrero Jr., who attempted to get a force at second on a grounder from designated hitter Luke Voit to tie the game. Torres was safe at second.

Toronto reliever Jason Adam then replaced starter Anthony Kay. A wild pitch from Adam pushed Voit and Torres to second and third base, respectively. They were cashed in on a single to centre from Gio Urshela.

The lefty Kay was on the hook for all five runs in his second outing for Toronto. His 96-pitch effort lasted only 4 1/3 innings. Yankees starter Masahiro Tanaka departed after a decent five innings, in which he struck out six but yielded four runs.

The Blue Jays managed to pull to within 5-4 in their half of the fifth. Bichette led off with a double to left centre and scored on Biggio's single to centre.

Randal Grichuk put Toronto ahead 1-0 with a solo home run to left field in the second inning for his career-high 26th of the season.

The Blue Jays increased their lead to 3-0 with a two-run fourth. Rowdy Tellez singled to centre with one out. He scored on catcher Reese McGuire's double off the top of the wall in centre. McGuire wound up touching home on a throwing error from Torres on an infield hit from Teoscar Hernandez.

Toronto lefty reliever Tim Mayza began the 10th inning, but hurt the elbow on his pitching arm on a ball-four pitch to Didi Gregorius and retired to the clubhouse for treatment.