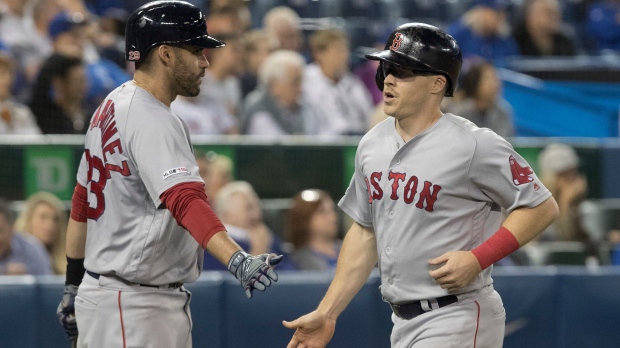 Boston Red Sox' Brock Holt comes in to score on a single by Xander Bogaerts in the seventh inning of their American League MLB baseball game against the Toronto Blue Jays in Toronto on Thursday, September 12, 2019. THE CANADIAN PRESS/Fred Thornhill

TORONTO - Mookie Betts had three hits and scored twice as the Boston Red Sox ended a five-game losing skid with a 7-4 victory over the Toronto Blue Jays on Thursday at Rogers Centre.

The Red Sox (77-70) had 12 hits and took advantage of some sloppy defence by the home side in front of 17,420 fans on a pleasant late-summer evening.

Andrew Benintendi (0 for 4) was the only starter in the Boston batting order without a hit. The Blue Jays (57-90) have dropped 17 of their last 22 games.

Toronto starter Clay Buchholz (1-5) faced his former team for the first time but couldn't find his rhythm after a crisp first inning.

Buchholz, who won 81 games for the Red Sox over 10 seasons, needed only seven pitches to get the first three outs but Boston put the pressure on in the second inning.

After J.D. Martinez walked and Mitch Moreland singled, Marco Hernandez drove them in with a sinking liner that a sliding Billy McKinney couldn't squeeze in right field.

The Red Sox made it 3-0 in the third when Martinez drove in Bogaerts with a double.

Boston starter Jhoulys Chacin was pulled with two outs and two runners on in the bottom of the third. Southpaw Darwinzon Hernandez came on and struck out the hot-hitting Rowdy Tellez.

Buchholz gave up three more hits in the fourth, with Jackie Bradley Jr. scoring on a single by Juan Centeno.

The youngsters at the top of Toronto's batting order helped cut into the lead in the fifth. Bo Bichette drew a two-out walk and scored on a Cavan Biggio double.

Biggio came across on a single by Vladimir Guerrero Jr., whose 113 hits is tops among American League rookies this season.

Reese McGuire tried to pick off Holt from behind the plate but his throw sailed into centre field. Holt scored on a single by Xander Bogaerts.

The Blue Jays put runners on the corners in the seventh but Marcus Walden fanned Guerrero on three pitches. Guerrero appeared to crack his bat as he swung it lumberjack-style on the dirt in frustration.

Toronto loaded the bases in the eighth after two walks and an infield single. Matt Barnes walked Derek Fisher on four pitches to make it a three-run game.

Cora turned to Brandon Workman - the ninth Boston pitcher of the night - to get Bichette to fly out.

Fisher made Toronto's third error of the game in the ninth as he misjudged the hop from a Betts single. Betts took two extra bases as the ball rolled to the wall and he came home on a Holt single.

Biggio scored in the ninth on a Tellez sacrifice fly. Workman finished things off for his 12th save.