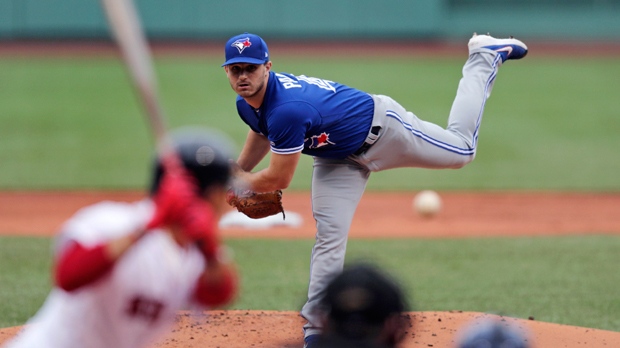 BOSTON - That was a relief.

And not a bad start, either.

Chris Sale and two relievers combined on a two-hitter, and the Boston Red Sox left-hander struck out 12 in six innings to beat the Toronto Blue Jays 5-0 on Thursday and earn his first regular-season win at Fenway Park in more than a year.

“It's good to see him win a game here, win a game at home - for whatever that means,” Red Sox manager Alex Cora said. “But the way he did it is the most satisfying thing.”

It was Sale's 11th game this season with 10 or more strikeouts. The seven-time All-Star, who had allowed five runs in three straight starts for the first time in his career, had a 7.89 ERA in three previous appearances against Toronto this season.

“I'm obviously coming off three of the worst starts of my career,” said Sale, who had a dozen teammates watch his bullpen session on Tuesday, whether to help spot a flaw in his mechanics or just to show their support. “Good, bad or indifferent, I'm not out on an island.”

Marcus Walden pitched two hitless innings for the Red Sox and Darwinzon Hernandez struck out two in a perfect ninth to end it.

Rafael Devers hit a three-run homer off Thomas Pannone (2-4), who matched Sale into the fifth inning before giving up Sam Travis' double and Sandy Leon's RBI single. After Mookie Betts walked, Devers hit the first pitch out to right-centre to make it 4-0 and chase Pannone.

“You could tell early on that Chris Sale was on, and so there was no room for error,” Blue Jays manager Charlie Montoyo said. “(Pannone) gave us a chance.”

Betts, who also hit a solo homer in the seventh, scored a run for the 13th consecutive game, tying Ted Williams' franchise record.

Devers has seven homers and 23 RBIs in 13 games this month, and he is batting .397 in July. He has 28 RBIs against the Blue Jays in 2019, the most ever for a player against Toronto in one season (with three games left).

It is the most for any player against a single opponent since Gary Sheffield drove in 28 runs against the Orioles in 2005.

“Whenever he's at the plate, you feel like something great is going to happen,” Sale said. “That was a big swing for us.”

Pannone was recalled from Triple-A Buffalo and was booked on a 5:30 p.m. flight to Boston that was cancelled because of Wednesday night's storms. Another flight five hours later was fully booked, so he hopped in a car for a 450-mile ride to Boston.

“I just really sat back. I was like, 'I can't let this affect me right now. I need to stay focused on tomorrow, today,”' said Pannone, who gave up four runs on five hits and three walks, striking out two. “I just enjoyed the ride, really.”

Blue Jays: Closer Ken Giles (nerve inflammation, right elbow) has been cleared physically but was given the day off after pitching the eighth inning Wednesday. ... RHP Ryan Borucki's (elbow discomfort) made a rehab start in Buffalo and his next start will be in the majors, either Sunday or Monday.

Red Sox: Nathan Eovaldi (elbow) struck out the side in a rehab start for Triple-A Pawtucket. ... 1B Mitch Moreland (right quad strain) will rehab with Pawtucket on Friday.