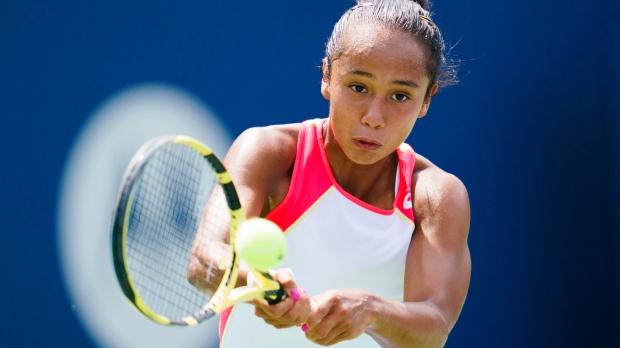 Leylah Annie Fernandez of Canada returns a shot to Marie Bouzkova of the Czech Republic in round 1 of the Rogers Cup women's tennis tournament in Toronto, Monday August 5, 2019. THE CANADIAN PRESS/Mark Blinch

Fernandez said she tried to focus as much as she could on executing her coach's game plan, while not trying to think about the magnitude of Sunday's match.

“I didn't think it was a final or anything. I just tried to think of it as another match,” Fernandez said after claiming the WTA 250 event.

Fernandez needed 89 minutes to defeat Golubic in a match that featured two players who hadn't lost a set all tournament long.

The Canadian cruised to win the first five games of the opening set, facing little trouble from her opponent.

Golubic finally won her first game 31 minutes into the contest, but Fernandez easily took the set.

Fernandez broke Golubic to take a 5-4 lead in the second set before serving out the match.

“I played an incredible first set,” Fernandez said. “The second set she started picking up her game, making less mistakes and being a little more offensive. I just tried to match that as much as I could. I'm happy in those key moments near the end I was able to stick to my game plan and the balls just went in for me and I'm happy for it.”

Fernandez converted on four of six break-point chances, while Golubic was good on just one of five.

The Canadian also had a big edge on first serve, winning 67.4 per cent of points when she got it in as compared to 51.4 per cent for her opponent.

Fernandez said she used the emotions she felt from last year's loss as fuel for Sunday's win.

The Canadian won't be able to celebrate her victory for long, however.

Fernandez is expected to be in Florida for the Miami Open Monday. She is scheduled to play in a qualifying match against Romanian Mihaela Buzarnescu Monday afternoon.

“We're just taking this one hour at a time,” Fernandez said.

Fernandez will rise to a career-high 69th in the world in the WTA rankings after Sunday's victory.

Golubic, who made her second final appearance this season, is projected to rise to 81st from 102nd.

This report by The Canadian Press was first published March 21, 2021.