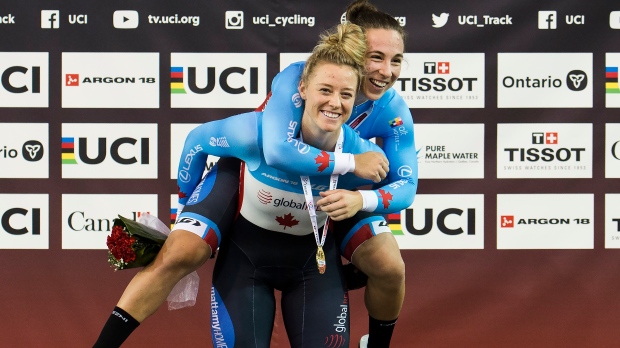 They may want to consider doing it more often.

Mitchell and Genest thrilled the crowd at the Mattamy National Cycling Centre by winning gold in 33.012 seconds. A Polish duo was just over a quarter-second behind in second place in 33.285.

“Definitely the home crowd was that (extra) two-10ths,” Mitchell said. “I could hear them cheering the whole way. The adrenaline was pumping and we executed it well.”

The Canadians led by a 10th of a second at the midway point as Genest, from Levis, Que., set an impressive early pace. She gave way to Mitchell, from Sherwood Park, Alta., for the final push.

“We had a bit of a rough morning in qualification,” Genest said. “It was not our best ride at all. It was really rough. We gradually built it to be one of our best rides in the final when it really counted.”

This was Genest's lone event of the three-day competition. Mitchell plans to race in two more sprint events this weekend.

“We're very comparable in times and speed-wide, but we have different strengths,” Mitchell said. “So we work really well together. I mean if you train with some of the fastest in the world, and you're constantly pushing yourself, constantly challenged, you're pushed to be the best.”

Lithuania beat Mexico for the bronze.

Mitchell and Genest have been focused on other sprint disciplines as the Canadians do not have enough Olympic qualification points in team sprint. They are planning to race together again at next month's world championships in Berlin.

The Canadians trimmed their personal best time at sea level by two-10ths of a second.

“They had an amazing time for the final,” said sprint coach Franck Durivaux. “It was crazy.”

In the women's race, Victoria's Erin Attwell, Miriam Brouwer of Burlington, Ont., and Devaney Collier and Kinley Gibson, both from Edmonton, finished in 4:24.234, over a full second ahead of Belgium. The United States beat France for gold.

Canada held off Belarus by about a half-second in the men's race. Edmonton's Evan Burtnik, Chris Ernst of Kitchener, Ont., Victoria's Amiel Flett-Brown and Calgary's Jackson Kinniburgh came back over the last two laps to finish in 4:00.945.

The Canadian endurance squads are NextGen riders as the A-teams are training in New Zealand ahead of the world championships.

Mitchell set a world record in the women's flying 200-metre sprint at the Pan American championship last summer in Bolivia. She battled stomach flu symptoms ahead of the competition but was determined to compete.

“A gold medal - you can't beat that feeling so that makes me feel a little bit better,” she said.

She and Genest are the lone Canadian women's sprinters entered in the World Cup. Hugo Barrette of Iles-de-la-Madeleine, Que., is the only Canadian men's sprinter.

Sprint, keirin, omnium and madison competitions are set for Saturday and Sunday.

The sport's Olympic qualification formula is quite complicated but this event can help set up cyclists ahead of the world championship, when more ranking points will be available.

This is the third year that the Mattamy National Cycling Centre has hosted World Cup competition. The venue will also host the UCI para-cycling track world championship next week.