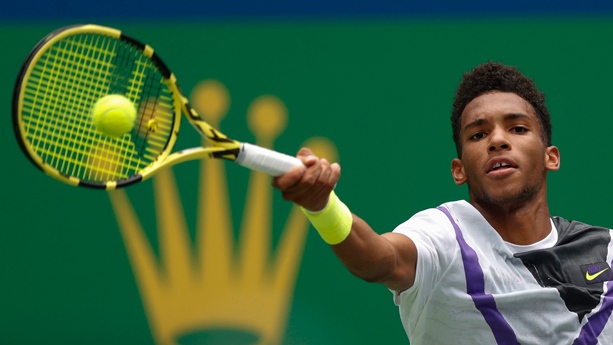 MARSEILLE, France - Three Canadians will play in the quarterfinals of the Open 13 Provence tennis tournament.

Montreal's Felix Auger-Aliassime ensured a Canadian trio would compete in the final eight by outlasting France's Pierre-Hugues Herbert 6-0, 6-7 (6), 7-6 (9) in a second-round match on Thursday.

Earlier Thursday, Denis Shapovalov of Richmond Hill, Ont., ended a four-match losing streak with a 6-4, 4-6, 6-2 win over Croatia's Marin Cilic in the second round. The fourth-seeded Shapovalov had a first-round bye at the ATP Tour 250 indoor hardcourt event.

It's first time three Canadians have reached the quarterfinals in an ATP Tour tournament since a 1990 event Rio de Janeiro, when Martin Laurendeau (quarterfinals), Martin Wostenholme (semifinals) and Andrew Sznajder (finalist) made it into the final eight.

The Canadian was excellent on serve, never facing a break point. He had 16 aces, two double faults and won 85 per cent of points when he got his first serve in.

Auger-Aliassime will face Egor Gerasimov in the quarterfinals Friday after the Belarusian upset No. 3 seed David Goffin of Belgium 6-4, 7-6 (5).

The fourth-seeded Shapovalov, from Richmond Hill, Ont., received a first-round bye before dispatching the 39th-ranked Cilic in just under two hours.

Shapovalov will meet world No. 55 Alexander Bublik of Kakakhstan in the quarterfinals.

Pospisil will battle No. 2 seed Stefanos Tsitsipas of Greece in another quarterfinal.

The final quarterfinal pits No. 1 seed Daniil Medvedev of Russia against Gilles Simon of France.