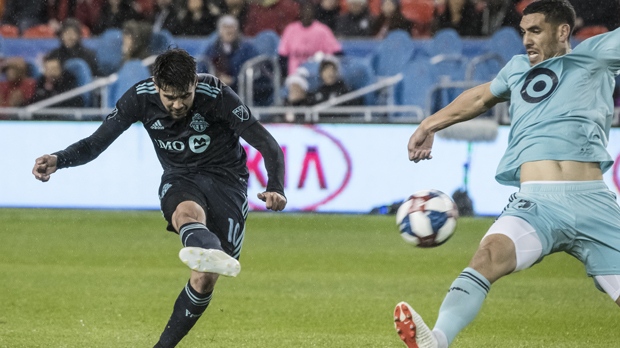 TORONTO -- Another win and show of offensive might from Toronto FC. But cracks are beginning to show in the newly remodelled TFC facade.

In the absence of the injured Drew Moor, Toronto (4-1-1) was an adventure in defending Friday night in a wild 4-3 win over Minnesota United (3-3-1). And its “All for One” motto was tested in the game's aftermath when star striker Jozy Altidore accused team president Bill Manning of putting his ego ahead of player welfare by banning a valued trainer because of his association with the now-departed Sebastian Giovinco.

Altidore, the tip of Toronto's spear, had been all smiles when he signed a contract extension Feb. 28. But, after exiting in the 82nd minute complaining of hamstring tightness, he was smoldering as he essentially lobbed a grenade into the Toronto dressing room.

The U.S. international has a history of hamstring problems but said Friday's pain “could have been avoided” if the trainer - Giuseppe Gueli - had not been sent packing.

“Which I think is ridiculous,” said Altidore. “So now this is what I'm faced with - games of egos ... hopefully (Manning) can put his ego aside and I can get the guy that's kept me healthy, kept Michael (Bradley) healthy, kept a bunch of the guys healthy and we can make things move forward.

“But to run a club you've got to be able to put your ego aside and put the players first.”

Altidore said he had been feeling the hamstring all week.

Team officials, who said Manning had no immediate comment, were clearly stunned by Altidore's outburst.

Bradley, who heard part of Altidore's comments, looked to defuse the situation when asked about it.

“There's a lot going on behind the scenes in terms of trying to make sure that we can have the right medical staff in place,” he said diplomatically.

Then, while noting emotions ran high “good and bad” after a game, he stood up for his teammate.

“I'm hopeful there's a solution here, because I think a lot of us certainly feel strongly (about) making sure that the staff behind the scenes is in place and is right. And I think, that in time, it will absolutely get taken care of.”

Bradley is likely right, although a rift between star striker and team president is nothing new. It's somewhat ironic that the mercurial Giovinco, who always seemed to go his own way while not terrorizing defences on the field, is still having an impact here while plying his trade in Saudi Arabia.

For Altidore, who usually despises talking about himself, to blow his top suggests a solution is needed pronto.

It will take more than restoring a trainer to fix a defence that has yielded eight goals over the last three games, however.

With Moor out, Chris Mavinga and Laurent Ciman have been proved wanting in the last line of defence. Ciman's decision-making is questionable while Mavinga has returned to the role of sometime-rogue defender who believes his athleticism will always work as a “Get out of jail” card. It hasn't.

Lack of depth at right back behind Brazilian Auro has also hurt. And those in front of the defenders need to put their hand up too.

On the first goal, Mavinga and Ciman were drawn to striker Angelo Rodriguez at midfield like moths to a flame. Rodriguez left both stranded when he passed the ball back to Jan Gregus, who delivered a long ball downfield for Darwin Quintero to run onto.

Quintero had inside position on fullback Richie Laryea, the lone defender in his area, and goalkeeper Alex Bono was of two minds about when to come out to contest. When he did, it was too late and Quintero headed the ball over him and then tapped it in.

The second goal came courtesy of a Romain Metanire cross that Rodriguez headed in. The feed followed an 18-pass sequence that moved the ball from side to side - and took advantage of Toronto's lack of width and propensity to retreat.

Minnesota had four players in the box while Toronto had six plus Bono. There simply wasn't enough movement or vision on the TFC side.

Ciman, who had position, complained that Rodriguez fouled him but referee Ismail Elfath disagreed. Whatever the cause, Ciman - who is good in the air - was beaten.

The third goal, a Quintero penalty, came after Mavinga took Rodriguez down at the edge of the box.

Vanney, while praising his team's spirit in fighting back, did not sugar-coat the problems.

“Too many soft goals tonight ... we've got to be better - from our backline to our individual defending.”