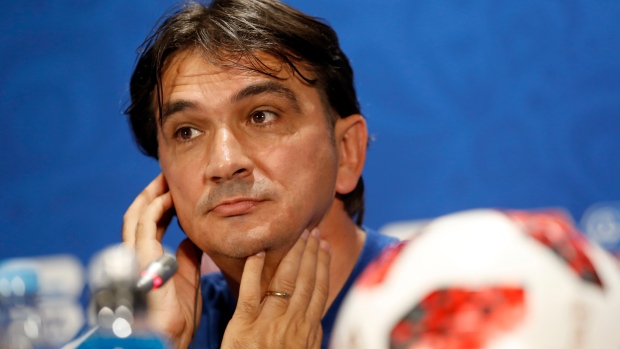 TORONTO -- Canadians of Croatian descent are eagerly anticipating the World Cup final that will see Croatia go up against France, saying the game will mark a moment of immense pride for fans of the team.

The match on Sunday will be the first time Croatia plays in the tournament's final, and comes after it beat out England earlier this week.

"Soccer for Croatians is like hockey for Canadians," said Ivan Kulis, who works at the Toronto Croatia Academy and goes back to Croatia often. "For a small country like Croatia, with 4.2 million people, (the final) means much more than a soccer game."

A win in the final would mark an immense victory for the country that broke away from Yugoslavia to become an independent state in 1991 -- a year after its national soccer team started playing.

"I don't think people realize that we did not even have a flag recognized before and our national anthem was not allowed, so hearing it and seeing our flag everywhere is huge for us," said Erica Zlomislic, who works at the Croatian Heritage Association.

"People around the world are wearing our colours and cheering for our tiny nation," the 47-year-old added. "I mean, we are proud already because no one thought we would make it this far."

Croatia has met France at the World Cup before -- 20 years ago it lost to the European soccer power in the semi finals, a game that many fans are well aware of.

"The only thing that stands in our way of achieving the World Cup is France, again" said Ivan Skoko, 25, who was born in Canada but lived in Croatia in 2014. "But we have overcome so much adversity in this World Cup that it would be difficult to bet against Croatia."

Soccer is one of the pillars that unite Croatians who live in Canada, especially in the Greater Toronto Area, he said.

"We are a very tight-knitted community and soccer brings people together," he said.

According to the latest Statistics Canada census, around 5,000 people whose mother tongue is Croatian live in Toronto and just a little under 5,000 more live in Mississauga, Ont.

"A lot of people in the GTA will be celebrating in the park behind the Croatian Martyrs church in Mississauga and they will watch the game on a screen," says Skoko. "I'll be at the park for the party afterwards, for whatever happens."

Croatia, the fourth-smallest of the 32 World Cup teams ahead of Panama, Uruguay and Iceland, has a chance to be the least-populous nation to win since Uruguay took the title in 1950, when it was a nation of just over 2 million.

-- with files from the Associated Press.