Federer and Osaka withdraw from Rome quarters with injuries 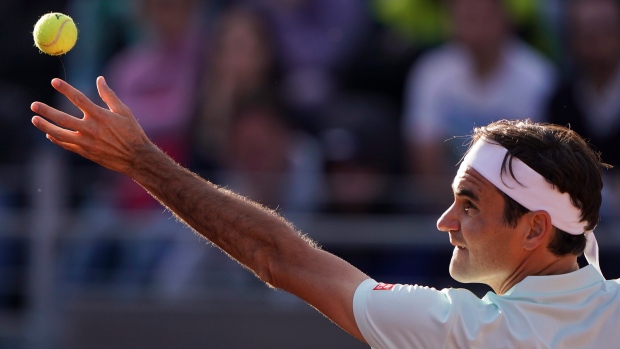 Roger Federer of Switzerland serves the ball to Borna Cedric of Croatia at the Italian Open tennis tournament, in Rome, Thursday, May 16, 2019. (AP Photo/Andrew Medichini)

ROME -- Roger Federer and top-ranked Naomi Osaka withdrew before their Italian Open quarterfinals because of injuries on Friday.

Federer reported a right leg injury ahead of his match against Stefanos Tsitsipas, while Osaka said her right hand was injured before she was to play Kiki Bertens.

Federer and Osaka both won two matches on Thursday after play was backed up due to rain a day earlier.

Federer says, "I am disappointed that I will not be able to compete today. I am not 100 per cent physically and, after consultation with my team, it was determined that I not play. Rome has always been one of my favourite cities to visit and I hope to be back next year."

Tsitsipas and Bertens advanced to the semifinals via walkover.