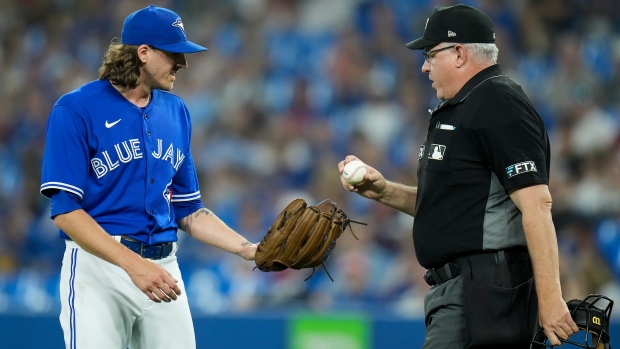 Toronto starter Kevin Gausman was excited about getting a chance to pitch against Baltimore for the first time since he was traded by the Orioles in 2018.

The long-awaited start did not go as planned.

Gausman didn't make it out of the third inning as the Orioles rocked him and the Blue Jays 10-2 on Thursday afternoon to salvage a split of a four-game series.

“Obviously a rough day at the ballpark,” Gausman said. “I tried to make adjustments but couldn't. (My) command just wasn't there.”

The right-hander lasted 2 1/3 innings - his shortest outing of the season - as Baltimore scored six times in the third en route to a blowout win at Rogers Centre.

“I was really happy with the pressure we put on them and making him come in the strike zone,” said Orioles manager Brandon Hyde. “We just jumped on him early. It was great.”

Cedric Mullins had three of Baltimore's 13 hits and Austin Hays homered for Baltimore (28-37). It was just the sixth loss in 21 games for the Blue Jays (37-26), who were stifled by Orioles starter Tyler Wells (4-4) over his solid six-inning appearance.

Teoscar Hernandez hit his fifth homer of the season for Toronto. The Blue Jays had eight hits.

Gausman, who was drafted fourth overall by Baltimore in 2012, spent parts of six seasons with the Orioles before he was dealt to Atlanta in July 2018. He remained in the National League until he signed a long-term deal with Toronto in the off-season.

He said while Baltimore has a special place in his heart, he really wanted to deliver a strong performance in the mid-afternoon start.

Instead he had a pitching line he'd rather forget: seven hits, seven runs - five of them earned - and a walk with three strikeouts.

“I really wanted to go out there and shove it to them to be honest,” Gausman said. “So to (struggle) in my first start against my former team - it sucks.”

The Orioles scratched out an early run after Mullins led off with a single, moved to third on an infield single and scored when Toronto couldn't turn a double-play in time on an Adley Rutschman grounder.

An error by Toronto third baseman Santiago Espinal led to two unearned runs in the third inning and a Rougned Odor sacrifice fly was sandwiched by four hits, including three hard-hit doubles.

“He wasn't commanding all his pitches,” said Blue Jays manager Charlie Montoyo. “They did a good job laying off his splitter and slider. It seemed like they were hunting for the fastball and they got him.”

Reliever David Phelps also gave up an RBI single in the third inning as the Orioles batted around.

Wells, meanwhile, allowed five hits, one earned run, one walk and struck out three. The 429-foot Hernandez solo shot was his only real hiccup.

Baltimore tacked on two more runs in the seventh inning against Jeremy Beasley and Hays hit a solo shot in the eighth off Matt Gage.

Several school groups were on hand for the matinee, boosting the announced attendance to 36,832. The game took two hours 58 minutes to play.

Blue Jays third baseman Matt Chapman was held out of the starting lineup Thursday due to a sore wrist. He missed three games with the same issue earlier this month.

The first 15,000 fans at the stadium for the matinee received Hyun Jin Ryu replica jerseys. The veteran left-hander is out for the season due to an elbow ligament issue.

Ryu will need surgery and may not pitch for the Blue Jays again. He's under contract through next year but a Tommy John procedure is a possibility, which could sideline Ryu through next season as well.

The Blue Jays will close out their seven-game homestand with a weekend series against the New York Yankees.