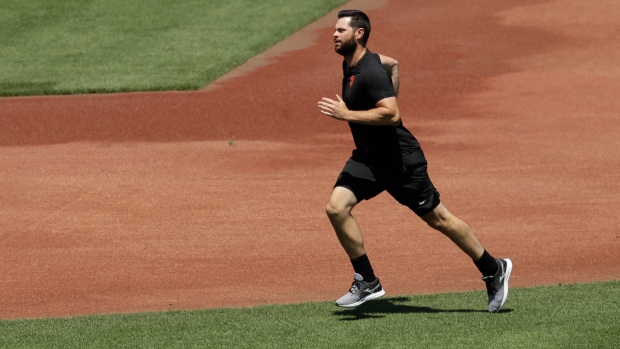 SAN FRANCISCO -- Giants first baseman Brandon Belt has been using a walking boot as he nurses a sore right heel that will keep him out at least a week.

San Francisco manager Gabe Kapler said Belt will be re-evaluated in five to seven days but it's too soon to know whether the injury could affect his status for the season opener July 23 at Dodger Stadium.

"I think making an assessment for the opening series against the Dodgers is probably a little bit premature as it relates to Brandon's heel," Kapler said. "I talked to him today, he was feeling pretty good. We walked across the field and then up the stairs to the clubhouse together. He was feeling fairly confident. I think more than anything else it's probably smart to be patient and take a look at where he is in a couple of days." The 32-year-old Belt has dealt with heel pain previously and aggravated it this time doing agility work in a ladder drill. He played in 156 games last year following two injury-plagued seasons and batted .234 with 17 home runs and 57 RBIs.

"He's probably going to be down for a few days," Kapler said.

Hunter Pence took batting practice but didn't run the bases or play the outfield as a precaution because of minor pain in his foot, Kapler said. All-Star catcher Buster Posey missed another practice because of a personal issue that also kept him away from Oracle Park for Friday's initial session.

The team was able to return to the field for a modified simulated game after Tuesday's workout got cancelled because of a delay in the return of coronavirus test results. San Francisco had received most of its results from tests performed Monday, and those that came back were all negative.

"Things feel like they're on track right now," Kapler said of the process.