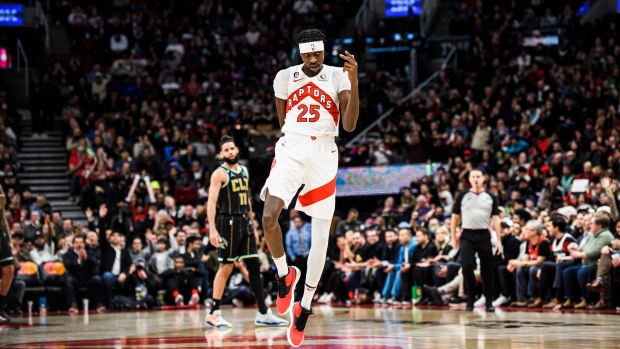 TORONTO - The Toronto Raptors finally rediscovered their long-range shooting - and it led to a victory on Tuesday.

Pascal Siakam scored 28 points while O.G. Anunoby matched his career-high of six three-pointers on a 22-point night and the Raptors beat the Charlotte Hornets 132-120 for their second consecutive win.

The Raptors, who entered the game 29th in the league in three-point shooting - Charlotte is last - shot a season-high 20 three-pointers, and were just shy of their season's best three-point percentage (45.5 per cent vs. their best of 46).

Terry Rozier scored 30 points to top the Hornets (11-31), who have the second worst record in the league.

Coming off a 117-105 win over Portland two nights earlier that snapped a three-game losing streak, the Raptors carried some momentum into Tuesday, shooting 50 per cent from three-point range through the first half.

Clutching a two-point lead the start the fourth, the Raptors opened the quarter with an 11-5 run punctuated by a Boucher three-pointer that put them up by eight. Anunoby hit consecutive three-pointers, then VanVleet drilled two in just over a minute for a 15-point lead with 3:26 to play.

A basket by LaMelo Ball pulled the Hornets to within 10, but Trent's three followed by a big dunk by Anunoby all but stuffed the Hornets' hopes for a win.

The Raptors and Hornets looked anything but the league's worst three-point shooting teams in the first quarter, shooting a combined 11-for-17 from behind the arc. Siakam had back-to-back threes and 14 points in a tight first quarter that saw neither team lead by more than five points, and Toronto led 35-34 to start the second.

Achiuwa, who'd missed 19 of his previous 20 three-point attempts before Tuesday, went 3-for-3 in the second quarter, including a pair on consecutive possessions that put Toronto up by five. A tip dunk by Boucher made it a nine-point lead with 2:20 left in the half, and Toronto took a 72-66 advantage into the break.

The Hornets shot a sizzling 61.1 per cent in the third quarter and their 13-2 run turned a nine-point Raptors lead into a two-point deficit. Toronto led 96-94 with one quarter to play.

PORTER SURGERY: Otto Porter Jr. is out for the season after having surgery to repair a dislocated toe. Porter, who helped Golden State to an NBA title last season, has only appeared in eight games with the Raptors. He was sidelined early in the season with a hamstring injury, then dislocated his toe on Nov. 14.

“When we tried to get him back in action, tried to ramp it up a little bit, he just wasn't making progress,” coach Nick Nurse said. “He went to see some specialists and in the end, this was the long-term solution for him.”

AWARDS: The Raptors won the league's NBA Inclusion Leadership Award for the 2021-22 season.

UP NEXT: The Raptors host the Hornets again on Thursday, and then cap their season-long six-game homestand on Saturday against Atlanta.

This report by The Canadian Press was first published Jan. 10, 2023.