'I don't fear it': Battling for a playoff spot, Leafs roll the trade dice 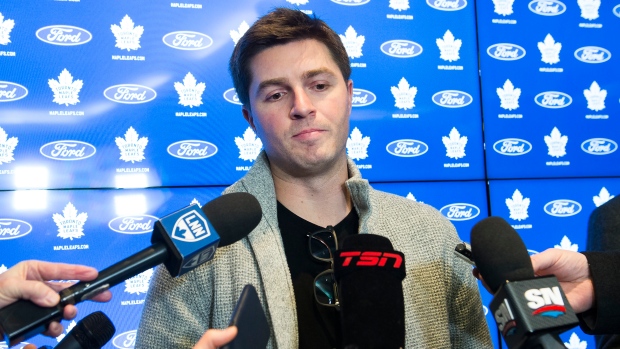 Toronto Maple Leafs general manager Kyle Dubas speaks to the media about the recently acquired players the Los Angeles Kings in a trade during a press conference in Toronto on Thursday, February 6, 2020. THE CANADIAN PRESS/Nathan Denette

The Maple Leafs' general manager swung a trade with the Los Angeles Kings for the netminder late Wednesday as he looks to steady Toronto's shaky backup position with No. 1 goalie Frederik Andersen still recovering from a neck injury.

The Leafs also got bruising forward Kyle Clifford, who Dubas represented when he was an agent, in the deal that saw winger Trevor Moore, a third-round pick in 2020 and a conditional third-rounder in 2021 go to the Kings.

“You just know their character and you know what they're about,” Dubas said of Campbell and Clifford on Thursday. “It gives you a little bit more security.”

A 25-year-old GM for the Ontario Hockey League's Sault Ste. Marie Greyhounds back in November 2011, Dubas acquired the highly-touted Campbell from the Windsor Spitfires for two players and seven draft picks.

The blockbuster swap was supposed to propel Sault Ste. Marie on a long playoff run, but the Greyhounds instead fell flat and finished one point behind the Spitfires to miss the post-season altogether.

Dubas, however, dusted himself off from that misstep and eventually built the OHL franchise to a point where he was hired to join the Leafs' front office in 2014.

“You do feel a little bit more comfortable when you know the quality of the people you're getting,” Dubas added. “But that doesn't mean anything unless they're good enough to play, which we feel that both of them certainly are.”

Dubas needs Campbell to fill the troublesome No. 2 goalie spot that's been an issue ever since Curtis McElhinney was lost on waivers before last season. Garret Sparks was unable to carry the load in 2018-19, and Michael Hutchinson hasn't been up to the challenge in 2019-20.

A team that began the season with Stanley Cup aspirations, Toronto's star-studded roster sat outside the Eastern Conference playoff picture heading into Thursday's action - a point back of Florida for third in the Atlantic Division, and two adrift of the second wild-card spot with the Feb. 24 trade deadline looming.

“The teams ahead of us have games in hand,” Dubas said. “We're not in a great spot, but it's a great test and opportunity for our guys to develop and grow.

The 28-year-old from Port Huron, Mich., was traded to the Kings in 2016 after mostly bouncing between the American Hockey League and the third-tier ECHL. He credits minor-league goalie coach Dusty Imoo and Kings' counterpart Bill Ranford with his game.

“(Imoo) transformed my character and made me take a step back and enjoy life a little more,” said Campbell, who admitted to being nervous in front of three TV cameras and more than a dozen reporters Thursday. “Bill Ranford helped me out tremendously with me details.”

The Leafs, meanwhile, surrendered the ninth-most shots heading into Thursday at 32.4, but have the league's fourth-best offence compared to the Kings' 30th-ranked attack.

Andersen, who suffered a neck injury in Monday's demoralizing 5-3 loss to Florida, worked out with goalie coach Steve Briere as Dubas, Campbell and Clifford met the media at the Leafs' practice facility.

Dubas said there was more urgency to get Campbell into the fold with the uncertainty surrounding Andersen, who's 24-9-6 with a .910 save percentage and a 2.87 GAA.

“You're always worried about the depth,” said the 34-year-old GM. “You do always have that fear: 'What if something happens to him?”'

Something did to Andersen against the Panthers, thrusting Hutchinson into the spotlight.

The 29-year-old had won four straight starts heading into Wednesday's game in New York, but surrendered four goals on 30 shots in a 5-3 loss to the Rangers, including a soul-crushing sequence just 34 seconds after Toronto had cut its deficit to 3-2.

Hutchinson has also been terrible in relief with three consecutive losses and a .783 save percentage accented by Monday's defeat to Florida where he allowed three goals on 13 shots in 40 minutes.

Clifford, meanwhile, should add some much-needed muscle to the bottom-6 forward group. The six-foot-two, 211-pound winger from Ayr, Ont., - a town about 115 kilometres west of Toronto - has six goals and 14 points in 53 games, and immediately becomes the Leafs' penalty minutes leader with 45.

“It's no secret I've got a real love for this team,” said Clifford, whose favourite player growing up was Mats Sundin. “It's a childhood dream just to be able to put that jersey on.”

A Stanley Cup champion with the Kings in 2012 and 2014, Clifford also has as many fights (three) this season as the rest of Toronto's roster combined.

Dubas has assembled a skilled group, but said the reason he hasn't previously added a player of Clifford's ilk - one able to skate as well as take care of himself and his teammates - is simply because there aren't many available in today's game.

“They didn't bring me in to outpace Auston Matthews in goals,” Clifford joked. “I know what I am and I know who I am.”

“They've started to build something here,” said Clifford, who can become an unrestricted free agent July 1. “I'm just happy to be a part of it.”

And with the pressure ratcheting up, Dubas felt it was time to make the move.

“Teams were getting ready to act,” he said. “We needed to strike.”

Notes: Dubas said it's unlikely Andersen plays Friday at home against Anaheim, but left the door open for a return Saturday in Montreal. ... Leafs defenceman Cody Ceci suffered an ankle injury Wednesday and is heading to the injured reserve.

This report by The Canadian Press was first published Feb. 6, 2020.

Toronto Maple Leafs new backup goaltender Jack Campbell who was traded from the Los Angeles Kings speaks to the media during a press conference in Toronto on Thursday, February 6, 2020. THE CANADIAN PRESS/Nathan Denette