Leafs rookie Engvall learning at NHL level thanks to Keefe, Kapanen and Spezza 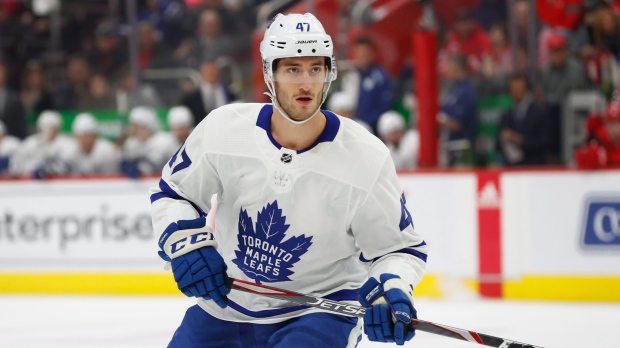 Toronto Maple Leafs' Pierre Engvall plays against the Detroit Red Wings in the first period of an NHL hockey game Wednesday, Nov. 27, 2019, in Detroit. Just because Pierre Engvall's out of the American Hockey League, it doesn't mean he's done developing his game. THE CANADIAN PRESS/AP/Paul Sancya

TORONTO -- Just because Pierre Engvall's out of the American Hockey League, it doesn't mean he's done developing his game.

Engvall scored his second goal in as many games on Saturday night, the eventual winner in the Toronto Maple Leafs' 3-0 shutout of the visiting New York Islanders. The goal was set up by a dazzling play by Engvall's linemate Kasperi Kapanen, sliding the puck between a defender's legs before backhanding a pass to Engvall in the slot.

Although it was just his 21st game in the NHL, Engvall still had the presence of mind to hesitate slightly and get Islanders goalie Semyon Varlamov to commit before wrisitng the puck into the net.

"On the goal I just tried to hold on to it for a second to get the goalie moving and I think I found the spot there. It was really nice to see it go in," said Engvall. "Obviously, Kapi... I don't know what to say about that play but it was really good."

Engvall was drafted by Toronto in the seventh round of the 2014 NHL Draft but continued playing in his native Sweden before making one post-season appearance for the AHL's Toronto Marlies in the 2017 Calder Cup playoffs.

He then spent most of the 2017-18 Swedish League season with HV71 Jonkoping before returning to Toronto for nine regular-season games and winning the 2018 Calder Cup with the Marlies.

In 2018-19, he spent the entire AHL campaign under the tutelage of Toronto head coach Sheldon Keefe, who is also now with the Maple Leafs after starting this season with the Marlies.

Through Engvall's time in the AHL and now his rookie season in the NHL, Keefe has put an emphasis on the young Swede's defensive play. Keefe sees a lot of potential in Engvall and wants to make sure he has a well-rounded game.

"Big guy, very strong, skates and moves very well, has a good skill set, there's so much to work with there," said Keefe after Saturday's game. "You know enough about him before he even arrives to the Marlies, various camps and reports you get from when he's playing in Sweden, when a guy with that physical package arrives you're pretty excited about him.

"I think the experience of playing in the Calder Cup really gave him a great sense of how he can use his skill set to be very hard to play against."

Now that Engvall has a sense of what it takes to be defensively reliable, Keefe has paired him with Kapanen and veteran centre Jason Spezza to help him hone his offensive skills at the NHL level.

"Spezza is a huge part of (our success). He knows what to say to us to get us going. He's helping us with our positioning," said Engvall. "Obviously, Kapi's a fast skater and I'm a good skater too so that helps a lot.

"(Spezza) is just a really positive guy. If you have a bad shift, he tells you 'try to do this, try to do this,' and then we figure it out almost every time."

That veteran influence is clearly already having an impact on Engvall, who has three goals in his past four games and five goals in the last eight, the lion's share of his six goals on the season.

This report by The Canadian Press was first published Jan. 5, 2020.