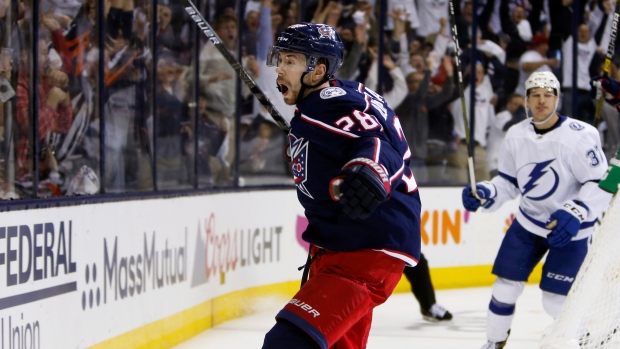 And quite frankly, neither did many others.

A day after the Tampa Bay Lightning -- the Presidents' Trophy winners, a team that tied the NHL record for wins in a season -- were swept out of the playoffs in four straight by the Columbus Blue Jackets, members of the Boston Bruins and Toronto Maple Leafs reflected on a result that stunned the hockey world.

"Stanley Cup playoffs, nothing surprises you," said Cassidy, Boston's head coach. "Once you're in, every team has a chance.

The winner of the Eastern Conference quarterfinal between the Leafs and Bruins, which Toronto led 2-1 heading into Wednesday's Game 4 at Scotiabank Arena, will face Columbus in the second round.

"It's definitely shocking, but it's playoff hockey," Leafs winger Zach Hyman said. "I don't think Columbus is really an eighth seed. They loaded up at the (trade) deadline. They've got some great players.

"But Tampa set a bunch of records, so it's pretty surprising."

Those records included tying the NHL's mark for victories with 62, and putting up 128 points, fourth-most in league history.

Tampa hadn't played a truly meaningful game in months are were the first team to the qualify for the post-season.

They were also the first to head home.

"It's a different game (in the playoffs)," Toronto blueliner Travis Dermott said. "It's kind of crazy to think such a good team in the regular season can go out in four like that.

"You never really would have thunk it."

"It's not what people expected or figured that was going to happen with the regular season they had," he said. "It doesn't matter what seed you're in. Or your place.

"It all comes down to will."

But Toronto head coach Mike Babcock said the parity among teams across the league is such that nothing should really come as a shock in the playoffs.

And he would know.

Despite accumulating 124 points and winning the Presidents' Trophy for the best regular-season record in 2005-06, Babcock's Detroit Red Wings lost in the first round to the Edmonton Oilers. Babcock also swept Detroit in the 2003 playoffs when he was with Anaheim despite his Mighty Ducks finishing 15 points back of the Red Wings in the standings.

"There's not much to pick between us," Babcock said Wednesday morning. "It's hockey, it's hard. Lots of times during the year you think this team's going to win because of the record.

Cassidy, whose club fell to the Lightning in the second round of the playoffs last spring, noted that the Blue Jackets found a way to get inside Tampa's defence, which had an injured Victor Hedman for just two of the four games.

"They were heavy against them," he said. "They found the formula, they get to advance."

The New York Islanders also completed a sweep of the Pittsburgh Penguins on Tuesday, a result somewhat overshadowed by Tampa's ouster.

The Islanders were the higher seed, but to see them send Sidney Crosby, Evgeni Malkin and Co. packing in four straight was another eyebrow raiser.

"It's a crazy start to the playoff year with those two teams going down," Hyman said. "A lot of great players are out pretty early.