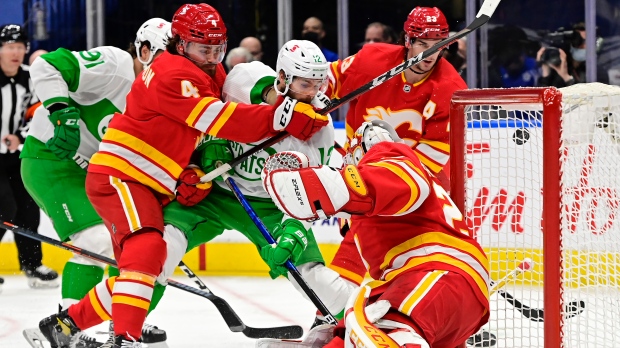 TORONTO - Mark Giordano scored the winner and Jacob Markstrom made 24 saves as the Calgary Flames defeated the Toronto Maple Leafs 4-3 on Friday.

Mitch Marner, Jason Spezza and Alexander Kerfoot replied for Toronto (19-10-2), which has lost six of its last seven games in regulation.

The struggling Frederik Andersen stopped 14-of-18 shots for the Leafs, who will look to get back on track Saturday when the teams play their sixth of nine meetings this season back at Scotiabank Arena.

Toronto, which had four days off to reset between games after dropping a pair last weekend, had a nine-point lead atop the North Division standings on March 3, but were tied with the Edmonton Oilers on points - the Leafs had three games in hand - heading into Friday after dropping five of its last six. The Winnipeg Jets, meanwhile, were two points back with the same amount of games played.

Sporting their white and green St. Pats jerseys, the Leafs got a boost with the return of Wayne Simmonds to the lineup after the gritty winger missed the last 18 games with a broken wrist. Backup goalie Jack Campbell (leg) also suited up for the first time since Jan 24, while winger Alex Galchenyuk - the No. 3 overall pick in 2012 now with his seventh NHL organization since June 2018 - debuted for Toronto on a line with John Tavares and William Nylander.

Down 3-2 after a wild first period where saves were at a premium, the Leafs tied things when Marner wristed his 12th past Markstrom at 3:48 of the second.

Holl would eventually drop the gloves with Tkachuk in a strange fight where the blue-liner went to pick up his gloves after originally dropping them when challenged before both players eventually started swinging their fists.

Calgary then connected three seconds after Ilya Mikheyev went off for holding when Giordano blasted a one-timer on Andersen, who entered with an ugly .872 save percentage over his last five appearance.

Milan Lucic nearly made it 5-3 for the visitors late in the second, but he hit the post with Toronto's netminder at his mercy.

NHL goal leader Auston Matthews hit the post for the Leafs from in tight just over five minutes into the third as before Markstrom shut the door on Spezza on a redirection. Toronto's second-ranked power play off that sequence, but couldn't connect despite some decent pressure.

The Leafs got another man advantage with under eight minutes to go in regulation, but Markstrom dove in front of a Matthews shot when half the net was open to keep the Flames up by one.

Toronto pushed with Andersen off for the extra attacker, but were unable to find a way through as the Leafs' skid continued.

Coming off Wednesday's 7-3 home loss to Edmonton, the Flames opened the scoring 1:19 into the opening period when Tkachuk's effort from the side boards on the game's first shot went in off Leafs defenceman Travis Dermott for his eighth, and first in nine games.

Calgary, which entered play with a 3-2-1 record since Darryl Sutter returned to the team to replace Geoff Ward as head coach, then made it 2-0 at 7:33 when Ryan fired his second on a one-timer from the slot.

Toronto cut the deficit in half when Spezza scored his sixth on Markstrom, who allowed all seven Edmonton goals Wednesday, at 12:47 after Morgan Rielly's initial shot was blocked.

The Flames went back up by two with 1:05 remaining in the first when Tanev's shot through traffic found its way past Andersen, who allowed three goals on seven shots in the period, for the defenceman's second.

But the Leafs got that one back shortly thereafter when Kerfoot's shot off the rush hit a defender's and fooled Markstrom upstairs for his fifth.