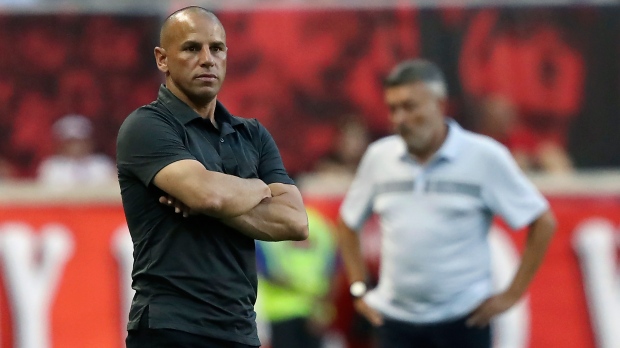 TORONTO -- Intensity and energy were the buzzwords Wednesday as the Chris Armas era kicked off at Toronto FC.

The club is the first in Major League Soccer to open training camp, given a little extra time to prepare for the Canadian Championship final against Forge FC. That will decide which team faces Mexico's Club Leon in the round-of-16 of the Scotiabank CONCACAF Champions League on April 6-7.

Most other MLS clubs report March 1 for a seven-day quarantine period, medicals and testing prior to the start of team training March 8. The regular season is scheduled to start April 17.

TFC worked out under the bubble at its north Toronto training centre Wednesday, with the temperature outside at minus-5 C, said to feel like minus-11. Light snow is forecast for Thursday.

Armas somehow managed to exude enthusiasm, even with his face hidden by a mask on a video call with reporters. At first blush, the 48-year-old head coach comes across as an Energizer Bunny-type man with a plan -- even in the complicated, ever-changing sands of a global pandemic.

Armas said there was plenty of energy on display, even in a video session. Players told him the training session, on a scale of one to 10 for intensity, was a 25, he said.

"What a good first day with these players," he said.

"It was an exciting first day because we hit the ground running," he said.

"Chris has come in with his staff and, I think, has set an incredible tone right away in terms of who he is, what he's all about, the energy that he's going to bring every day, the mentality, and now starting to get to work with what we're going to be as a team," he added.

There is still no word on where Toronto will play its home games, given the pandemic-related travel restrictions that forced it to finish out the 2020 campaign in East Hartford, Conn.

Florida appears to be leading the pack.

"There's options … We're prepared mentally and physically that we might have to set up shop in the States," said Armas, a former New York Red Bulls head coach.

Armas said there's a "good chance" that the team will stay in Toronto for the duration of camp. He acknowledged that will present a problem finding pre-season opposition, with a friendly against CF Montreal a possibility.

The date and location of the Canadian Championship final have yet to be announced, with mid- to late-March expected.

Even if the team has to move again during the pandemic, Bradley said there will be no excuses.

Toronto is coming off a 13-5-5 season that saw the team finish second overall despite having playing just four games at BMO Field due to the pandemic. Its season ended disappointingly in a first-round playoff loss to expansion Nashville SC.

Armas promises to field a team capable of pressing the opposition when they have the ball, one that demonstrates "a commitment and a hunger up the field to not allow teams to build attacks."

In possession, TFC will look to move the ball quickly and break down the opposition.

Russell is a former head coach with the USL's Reno 1868 FC and assistant coach with the San Jose Earthquakes. Sharp worked with Armas as a performance analyst with the Red Bulls.

With camp closed due to COVID-19, information is in short supply. The team has yet to provide a camp roster and Armas said while everyone was in town, not everyone had made it through quarantine, medicals or testing yet.

Forward Ayo Akinola, who missed a Canada camp in January with an undisclosed injury, is not yet ready to go, however.

As for the future of star striker Jozy Altidore, who has been the subject of transfer interest according to U.S. coach Gregg Berhalter, Armas said he look forwards to working with him once he completes the necessary pre-camp routine.

"I think we all know that he's helped build this house. He's been a really important guy around here," Armas said. "The passion that he brings.

"Some guys are just winners and he's a guy that your chances go up when he's out there."

Armas said Altidore had sounded enthusiastic in a text exchange about the team's planned pressing style.

Armas confirmed that veteran fullback Justin Morrow, whose contract expired at the end of last season, is expected back. Defender Eriq Zavaleta, also out of contract, is training with the team.

Armas, who won 66 caps for the U.S. as a defensive midfielder and was named to the MLS Best XI five times, said his family will remain in Long Island, N.Y., for the time being, with the eldest of his two sons currently in college.

"They'll join me here soon enough. We'll just have to see what the year brings."