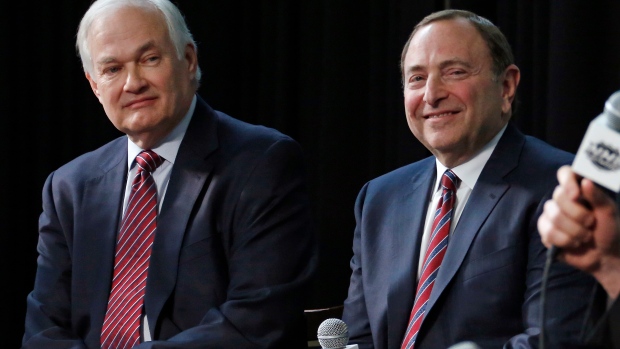 FILE - In this Jan. 24, 2015, file photo, NHL Player's Association executive director Donald Fehr, left, and NHL Commissioner Gary Bettman attend a news conference at Nationwide Arena in Columbus, Ohio. Given the gravity of the pandemic and the abrupt decision to place the NHL season on pause in March, it did not take Bettman and Fehr long to realize they were going to have to work together if play was to resume any time soon. (AP Photo/Gene J. Puskar, File)

Gary Bettman and Don Fehr finally have a chance to catch their breath.

With the backdrop of a global pandemic and the potential for economic catastrophe just over the horizon, the NHL and the NHL Players' Association announced Friday the two sides had ratified the plan to resume the pandemic-halted season this summer, and agreed to a four-year extension to the collective bargaining agreement through at least September 2026.

Getting hockey back on the ice during these unprecedented times brought together two parties that have previously gone toe-to-toe in bitter labour disputes. The NHL has seen three lockouts during Bettman's 27-year tenure as commissioner, including one that scratched the entire 2004-05 season.

But in a world where COVID-19's impact will likely be felt for years to come, there was only one reasonable path forward.

“I wouldn't even say it approached a negotiation,” Bettman said on a video conference call with reporters Saturday. “It was a recognition by both sides that we were being confronted with an incredibly difficult and unprecedented situation. And that to get through it, for the good of our constituents and good of the game, and for the good of our fans, we needed to work together.”

Fehr, the NHLPA's executive director and former head of Major League Baseball's union, said there was common understanding in the wake of the league's shutdown on March 12.

“No one knew what the future would bring,” he said. “This wasn't, and for all practical purposes could not be, normal collective bargaining.”

The extension to the CBA that was previously set to expire in 2022 includes a flat salary cap of US$81.5 million until revenues return to pre-pandemic levels, an agreement to lessen the impact of escrow - which guarantees a 50/50 split of revenues - on players, and opens the door for a return to the Olympics.

In short, it gives the NHL and NHLPA a framework to try and navigate what could be a difficult few years.

“But I do think this agreement meets the challenge.”

Shifting focus to the return, training camps are set to open Monday for 24 teams taking part in the return-to-play plan. Those clubs will then travel to the hub cities of Edmonton and Toronto on July 26 before the games begin to count Aug. 1 with as many as 52 contests in a nine-day stretch.

The 12 clubs from the Western Conference will be located in secure “bubbles” away from the general public in the Alberta capital, while the other dozen from the East will do the same in Canada's largest city.

“We're switching from one grind to another,” Bettman said. “We've got a lot more work to do.”

That also, somewhat surprisingly, includes ironing out a few final details with the Canadian government.

While the ink on the NHL's return and the CBA extension is still drying, the Edmonton Oilers and Toronto Maple Leafs both abruptly cancelled media availabilities scheduled for later Saturday.

That raised some eyebrows, since it was believed everything had already been signed off on.

“We're buttoned down at the provincial level in Ontario and Alberta,” Bettman said. “There are still a couple of details that we're just finalizing with the federal government.”

Deputy commissioner Bill Day said on the same video call that a spike in novel coronavirus cases in Las Vegas - which had long been viewed as a hub front-runner because its massive hotel complexes could be more-easily secured - was among the reasons the league eventually decided on two Canadian markets to stage its restart.

“We wanted to pick two hub cities that were really the best from a health and safety standpoint,” Daly said. “And we were concerned, given what was happening in Vegas that was not the case there.

“It certainly led into the decision we made.”

While players will be tested daily inside the bubbles, the chance of one or more positive tests remains. The league has said that wouldn't necessarily mean shuttering the restart, and has been vague about what number would constitute an “uncontrolled outbreak” as described in its return-to-play protocol.

“We look to our medical professionals more than anything else as to whether we're in a high-risk situation,” Daly said. “We have to be very cognizant of player health and safety. If we have an outbreak situation, it turns into a different judgment at the end of the day. There's no hard and fast numbers.”

After 142 days on the sidelines, the NHL is on course to return at the start of next month - on a Saturday, no less.

“I believed that we would get to this point,” Bettman said. “It was the right thing to do for the game and everybody involved.”