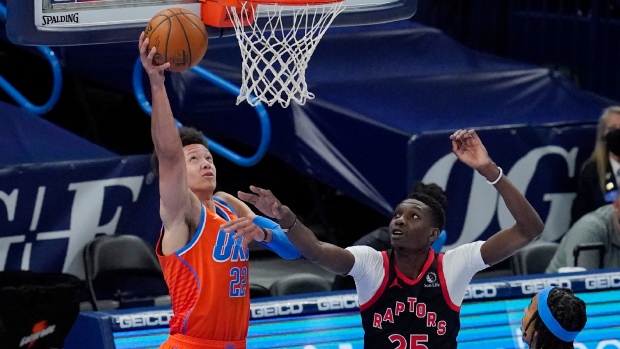 OKLAHOMA CITY - Svi Mykhailiuk scored 10 of his season-high 22 points in the fourth quarter, and the Oklahoma City Thunder rallied to beat the Toronto Raptors 113-103 on Wednesday night.

Mykhailiuk made 9 of 14 shots and had a career-high nine rebounds.

Moses Brown had 20 points and 11 rebounds, and Isaiah Roby added 17 points and 10 rebounds for Oklahoma City, which snapped a three-game losing streak. The Thunder outrebounded the Raptors 64-35.

Oklahoma City was missing three regular starters. Shai Gilgeous-Alexander remained out with right foot plantar fasciitis, Lu Dort was out due to concussion protocols and Darius Bazley was out with a left shoulder contusion. Rookie Aleksej Pokusevski, a recent addition to the starting lineup, was out because of health and safety protocols.

Gary Trent Jr. scored a career-high 31 points, and OG Anunoby added 20 points and 11 rebounds for the Raptors, who have dropped 13 of their last 14 games.

Toronto led 89-87 heading into the fourth. The Thunder held the Raptors to 30% shooting in the third quarter to close the gap.

Oklahoma City took the lead early in the fourth. Mykhailiuk went up high to throw down a two-handed dunk on a lob from Justin Jackson that put the Thunder ahead 98-93. Mykhailiuk followed with a 3-pointer to push Oklahoma City's lead to eight. Toronto got no closer than four points the rest of the way.

Raptors: Trent scored 10 points in the first quarter as Toronto shot 50%. ... Center Aron Baynes was issued a technical foul in the third quarter. ... Anunoby extended his streak of games with at least 10 points to 22 games.