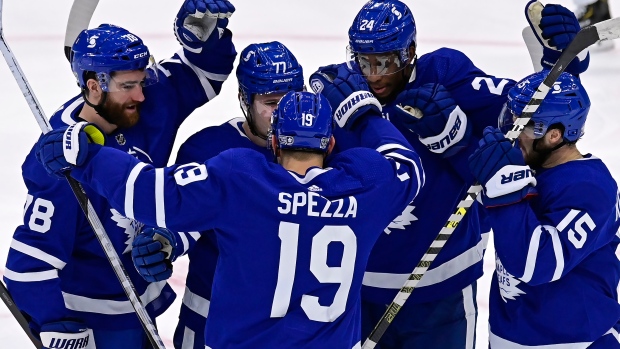 TORONTO - John Tavares scored the winner on a power play in the third period as the Toronto Maple Leafs defeated the Edmonton Oilers 4-2 on Friday.

Adam Brooks, with his first in the NHL, Jimmy Vesey, and Mitch Marner, into an empty net, had the other goals for Toronto (4-2-0), which got 30 saves from Frederik Andersen. William Nylander added two assists, while Marner had one of his own for a two-point night.

Tavares tipped his fourth goal of the season, and second of the two-game set with the Oilers, off Marner's shot after some sustained pressure on the man advantage.

The Leafs were minus two-thirds of their top line with both Auston Matthews and Joe Thornton out injured. Head coach Sheldon Keefe said before the game Matthews is day-to-day with “upper-body soreness” following Wednesday's 3-1 loss to the Oilers, while Thornton will miss at least four weeks after fracturing a rib in the same game.

Edmonton, meanwhile, activated winger James Neal, who was previously on the NHL's list of unavailable players due to COVID-19, off injured reserve for his first action of the season.

Down 2-1 through two periods, the Oilers got even 50 seconds into the third when McDavid, who grew up just north of Toronto in Newmarket, Ont., scored his second-ever goal at Scotiabank Arena when he deftly tipped Ethan Bear's point shot past Andersen for his fourth of the campaign.

The Leafs got a power play midway through the third when Toronto's new top line of Tavares, Marner and Zach Hyman, with the latter forcing Koskinen to stretch and make a save.

But the Edmonton goalie could do nothing on the Tavares winner at 11:46 after making another terrific stop on Toronto's captain moments earlier on the man advantage.

Andersen shut the door from there with Koskinen on the bench before Marner iced it with his fourth into an empty net as Toronto held on for its fourth victory in six outings to open the abbreviated 56-game schedule.

With the Leafs minus Matthews and Thornton, Keefe went back to 12 forwards and six defenceman after dressing an extra blue-liner the last two games. Brooks, Pierre Engvall and Alexander Barabanov dressed up front, while Mikko Lehtonen was scratched on the back end.

The Leafs got a power play early in the second period, but Oilers grabbed a 1-0 lead at 5:12 when Kailer Yamamoto threw the puck in front where Draisaitl fished it out of Nylander's skates and jammed home his second of the season, and second in as many games.

But Toronto got that one back on the same man advantage 43 seconds later when Jason Spezza fired a puck into the slot that glanced off Brooks and in for the Winnipeg native's first NHL goal in his eighth game.

Andersen then made a good stop outwaiting Jesse Puljujarvi on a break before Toronto pushed in front at 11:16 when Alexander Kerfoot intercepted an Adam Larsson pass behind Edmonton's net and quickly fed Nylander, who in turn patiently found Vesey to bury his second.

The Oilers secured that 3-1 midweek victory on a night where both teams' high-powered attacks featuring Matthews, McDavid and Draisaitl were neutralized by both sides' strong commitment to defensive structure and an unwillingness to take offensive risks in a North Division chess match.

Friday's opening 20 minutes was nearly as tight-checking, but there were a couple of chances at either end. Yamamoto, who was credited with Wednesday's opener after the Leafs flubbed the puck into their own net, forced a good stop out of Andersen less than 30 seconds in.

Leafs winger Wayne Simmonds then had an opportunity denied by Koskinen from the slot. Edmonton's Zack Kassian took a pass off the rush from McDavid that Andersen just got a piece of with the shaft of his stick.

McDavid had another rebound effort denied by Andersen before Simmonds saw his redirection smothered at the other by Koskinen as the teams headed to the locker rooms without finding the range.

Notes: Toronto placed Thornton on long-term injured reserve, where he joined rookie winger Nick Roberston (knee). ... The Oilers now head to Winnipeg for two against the Jets beginning Sunday before hosting the Leafs for another two-game set beginning Thursday. ... Toronto opens a four-game Alberta road trip Sunday in Calgary against the Flames.