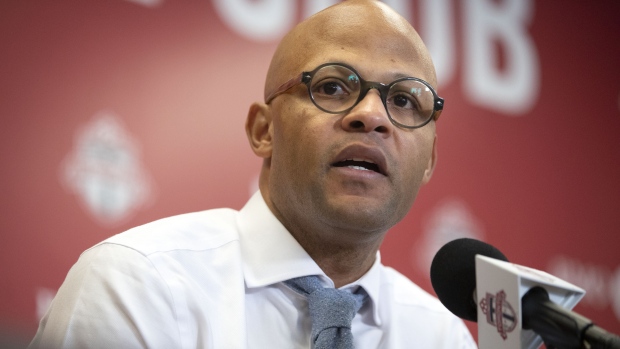 TORONTO - While GM Ali Curtis says his search for a designated player is progressing, Toronto FC has wrapped up another loose end by signing defender Chris Mavinga to a new contract.

A source confirmed that the deal for the French-born Congolese international will be announced Thursday. Mavinga signalled the move with a Jan. 2 tweet saying “Something BIG is coming.” On Wednesday, he posted “Here to stay.”

The 28-year-old Mavinga, who has spent the last three seasons in Toronto, and U.S. international Omar Gonzalez have become the first-choice centre back pairing for TFC.

As for the DP hunt, the club has a short list and is in talks with its targets. While the goal is to have the player signed prior to the season, Curtis says acquiring a marquee player takes time.

“A lot of these deals, they're not black and white and straightforward,” Curtis said in an interview.

The search for a DP is the major task for an established club that made the MLS Cup final for the third time in four years in 2019.

“I think the approach for this season has to be different than it's been in seasons past - and for other clubs as well,” said Curtis. “The approach to the roster is not really with a hammer, but really with a scalpel. And we're really only looking for one or so players that can help improve the team.

“We were a couple of goals away from winning the championship last year so we're bringing back the majority of the team, the core of the team. Really we're trying to be thorough and to be smart about that player that we're going to being in that would likely occupy a designated player spot.”

One loose end to be tied up is French winger Nicolas Benezet, who came to Toronto last season on loan from Guingamp. While Benezet has indicated his desire to return to Toronto, sometimes loudly via social media, club officials have said he likely doesn't fit in their plans, primarily because of cost.

Toronto still holds his MLS rights and, with reports of interest in Benezet from other MLS club, could get something for him. But Curtis says he has not heard from any other MLS clubs about the Frenchman.

Canadian fullback Ashtone Morgan, who joined the Toronto academy in 2008 at the age of 16, may also not be back. The club declined his contract option after last season, while leaving the door open a little bit. It seems to have closed since then, with little dialogue, but things could change.

In other club news, Toronto backup goalkeeper Alex Bono is training in England at Barnsley, a second-tier side.

Curtis knows from personal experience, having a training stint with England's Charlton Athletic after his rookie MLS season.