Thanks to hard work and timely inspiration, Wolfpack rise up rugby league ranks 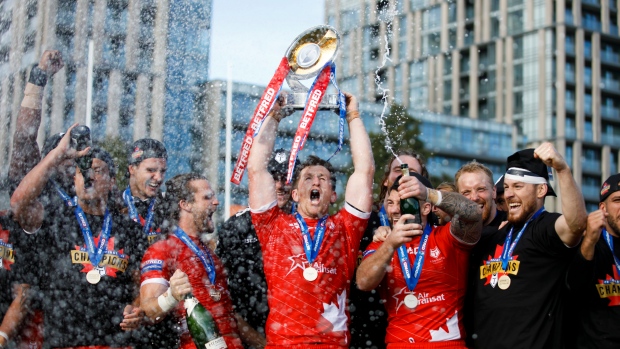 It combined disappointing moments from 2018, including snippets of Toronto's 4-2 loss to London in last year's rugby league promotion showdown, with highlights and challenges from 2019. Using Rudyard Kipling's poem “If,” the video ended with footage backing up the theory - in McDermott's words - that “If you want it, you can do it.”

For McDermott, the Kipling poem says: “Have a bit of humility about yourself and be ready for any challenge. Don't get too far above yourself and if you can manage all that, you can do anything you want. It's a case of looking inward. The answers are always on the inside.

“(O'Connor) knocked that (video) together, we showed the players and there wasn't a dry eye in the house, I can tell you that,” McDermott said.

On Saturday - post-video - the third-year Wolfpack achieved their franchise goal of earning promotion to the top-tier Super League with a 24-6 comeback win over Featherstone Rovers. Toronto will join 10 English and one French team in the top echelon of Northern Hemisphere rugby league next season.

Most coaches would unleash such an inspirational video on the eve of the big game. McDermott showed it the previous Sunday, allowing its message to percolate.

“When I sat back, I thought it's genius,” said veteran Wolfpack forward Jon Wilkin, a key player on and off the field in his first season in Toronto. “Because it gets all of that unnecessary emotion out of the way. It's in our subconscious, it's there.

“It's not an accident he did it then. He did it then so that we got that out of the way and could deal with getting on with the process.”

Flash back to the April 2016 news conference when plans for a rugby league franchise in Toronto were announced.

Most locals taking in the glitzy event at Real Sports Bar & Grill were skeptical. Junior hockey doesn't sell in Toronto and hockey is king in Canada. So why would the city embrace a sport that most people knew nothing about?

“I believe rugby league in itself is just the best-kept secret,” former England hooker Paul Rowley, who coached the Wolfpack in their first two seasons, said at the time. “It's out there in the corner shop, we need to put it in the supermarkets.”

Rowley, who parted ways with the club after it lost last year's Million Pound Game, was proved right.

Saturday's championship game drew an enthusiastic announced sellout crowd of 9,974 - a Wolfpack record - on a brisk, windy fall afternoon at Lamport Stadium. The previous record was 9,562 - the highest single-game attendance for any Championship game - set during the April home opener against Swinton.

Wilkin believes if you see a rugby league game live, you'll be back to see another.

“Why? Because it's great value. (And) two, it's a violent, physical sport that's played fairly and that I think embraces a lot of the things which people from Toronto like about sport,” he added.

“I don't think you can knock this. I'm a sports fan. I'd come here and watch. We just need more people to come and watch.”

For that to happen, city-owned Lamport needs some sprucing up. Opened in 1975, it is the Lada of sporting venues. The Wolfpack deserve credit for making a spartan, uncomfortable stadium into a party place.

Those who come next year will see the best of the sport.

“There will be some monsters coming over next year,” said McDermott.

“As good as athletes as we've got, there's some unbelievable athletes in the Super League,” said Brian Noble, Toronto's director of rugby.

“Bigger, better, bolder. That's what we've got to be,” said Wilkin.

McDermott estimates it will take the Wolfpack about 10 games in Super League to fully understand the speed and intricacies of the top tier.

“We'll get exposed more next year for sure,” said McDermott, who won four Super League Grand Finals and two Challenge Cups as coach of Leeds Rhinos. “Listen, I'm confident that we'll do a job in Super League next year but we're going to have some adjusting and conditioning to do.”

Toronto carried a 23-man squad this season, a small roster for a sport that features a 17-player matchday lineup. McDermott reckons the team will need 30 players in Super League. Noble believes 90 per cent of this year's roster will be back.

“Because I think there's 20 per cent improvement in them. And so does their coach, which is really refreshing that we're on the same page,” said Noble, in an apparent shot at Rowley. “We know we need to be a little bit faster, a little stronger. But I think the character of the team will get them through a lot of games next year.”

The Wolfpack will enter Super League with disadvantages.

The sport's import rules and salary cap were written for domestic sides, not North American entries. And because the Canadian franchise is coming into Super League under basically the same deal it struck prior to its 2017 debut, it will not get a cut of the British TV money that essentially covers each team's two-million-pound salary cap ($3.3 million) - it rises to 2.1 million pounds ($3.5 million) in 2020.

And is it fair that Toronto continue to look after visiting teams' travel and accommodation?

The Wolfpack will hope to renegotiate their deal, sooner rather than later.

Toronto's rivals will be fuelled by academies churning out young talent. Hardly anyone plays the sport in North America so local help is near impossible to find for the Wolfpack. And cheap, young talent is needed to balance top talent when it comes to fitting under the salary cap.

McDermott, who joined the Wolfpack prior to this season, has proved to be a savvy coach and great communicator. Not every coach can use a scene from the film “Conan the Barbarian” to illustrate the kind of challenges a game presented his team.

The former England international, Royal Marine and pro boxer added steel and character to the team while offering uncomplicated leadership. On the field, he added to the Wolfpack toolbox.

“The Wolfpack were very good last year and played a style which allowed them to get on the outside of a lot of teams' defence and score a lot of tries on the edges. But they couldn't do that in the final,” he explained.

“And from Day 1, my task was to adopt a certain style and a certain philosophy of play which doesn't rely heavily on the opposition being really poor in defence. It relies heavily on us showing up for each other and finding maybe that extra pass. Which is harder to coach, it's harder to implement and it's certainly harder to police. But if you get it right, it doesn't really matter whether (the opposition) are good or not. We've got a fair chance of breaking them down.”

The entire Wolfpack concept remains a head-scratcher. Toronto's players have homes in the north of England and essentially commute to Canada, living in student accommodations on this side of the pond. It's like a reverse franchise.

And yet it works. Noble happily rode to Saturday's game on a city-owned rental bike. McDermott usually takes the streetcar. The players relish what Toronto has to offer, be it taking in a Blue Jays game or Iron Maiden concert.

McDermott and Wilkin both paid tribute to the team's small off-field staff for their hard work. Wolfpack co-founder Eric Perez, who is now working on an Ottawa franchise, worked tirelessly to open North America to the sport. Majority owner David Argyle has poured money into the project.

“Without him it wouldn't exist,” Wilkin said of Argyle. “You need individuals with vision.”

After finding himself embroiled in a racism scandal earlier this year, Argyle - who apologized and stepped down as chairman and CEO - has returned to the Wolfpack's shadows.

Still Toronto had its issues off the field. The franchise has had to deal with visa and financial issues (Lussick was unable to get back into England for a while due to visa red tape, a payroll was missed and a former TV production partner has gone to court alleging non-payment).

Plus the team's ownership structure remains a mystery outside of Argyle.

For McDermott, the Wolfpack remain a work in progress on and off the field. “We are only three years old,” he noted.