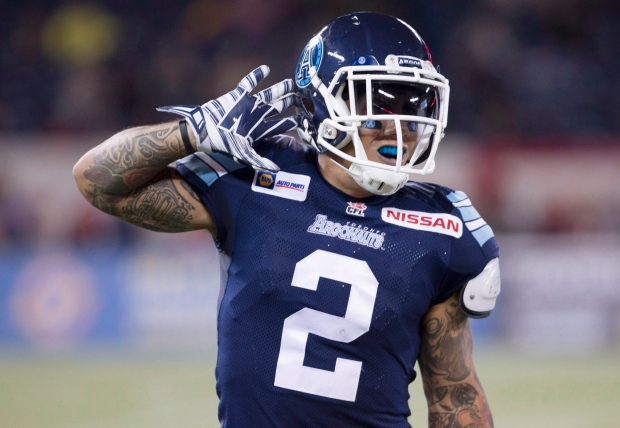 Toronto Argonauts' Chad Owens gestures to the crowd after gaining some running yards during first half CFL action against the Edmonton Eskimos in Toronto on Oct. 4, 2014. (The Canadian Press/Peter Power)

HAMILTON -- It's certainly a different look, but Chad Owens likes his new colours.

The veteran receiver/kick-returner signed a one-year contract with the Hamilton Tiger-Cats on Friday, three days after hitting CFL free agency. Not only is Owens heading to a different team but an arch rival after spending the last six seasons with the Toronto Argonauts.

"Yeah, I bet it does," Owens said after being told his new black, gold and white jersey sporting his usual No. 2 looked very different from the double-blue uniform he wore for years. "But it feels great.

"I'm excited and my family is excited. They get to continue to watch Daddy play football and do what he loves."

Signing with Hamilton capped an emotional ride for Owens that took him to the low point of realizing he wouldn't be re-signing with Toronto. He also wondered if at age 33 he'd be forced into retirement.

"There's rock bottom and there's under the rock and that's where I found myself when I found out my time in Toronto was done," Owens said. "That whole roller-coaster was tough to deal with but when this opportunity arose, (it was) like a resurrection, instant energy, instant excitement, just a total change of thoughts, change of mindset.

"I'm human and those type of thoughts (retirement) creep in because you think, 'Aw man, is this the end?' I couldn't see myself just going out like that and it being done, especially when I know I've got so much more to give. I'm extremely humbled and excited for this opportunity."

For years, Owens was the face of the Argos. On the field, he was an exciting playmaker on both offence and special teams. In 2012 he was named the CFL's outstanding player after registering 94 catches for 1,328 yards and six TDs, amassing a record 3,840 all-purpose yards. He capped that season by helping Toronto capture the historic 100th Grey Cup game at Rogers Centre.

Owens was also active in the community, last year even moving his family from Hawaii to live full-time in southern Ontario. In 2013, Toronto rewarded Owens with a lucrative contract extension reportedly worth $225,000 annually.

But after missing just two games his first three years in Toronto, Owens has been sidelined for 17 regular-season games the last three seasons. In 2015, he finished with 55 catches for 570 yards and two touchdowns over 13 contests. He also returned 37 punts for 468 yards (12.6-yard average) and a touchdown and three kickoffs for 49 yards.

"He's going to be a great fit in our locker-room . . . he kind of embodies the qualities we're looking for in football players and that's what he is. He's a football player, he's a winner, he's been a champion. He knows how to practise, he knows how to be a pro and how to conduct his business. All the things you look for."

"On behalf of the Toronto Argonauts, I would like to thank Chad Owens for his six years of hard work on the field and dedication to our club, especially in our community," Barker said. "He was a true professional during his time here and was an instrumental part of our 100th Grey Cup championship."

"We're going to piece the puzzle together," Austin said. "Like all of our other players, we've got to do schematically what we need to do to play to their abilities and play to their strengths."

Owens, a native of Honolulu, has appeared in 90 career CFL games since coming to Canada with Montreal in '09. He has 15,145 all-purpose yards and 28 TDs and registered 446 catches for 5,174 yards and 20 touchdowns. In 2010, he was named the league's top special-teams performer.

And Owens is anxious to prove he's still got plenty left, particularly when the Ticats and Argos face off in their annual Labour Day game.

"This is just going to be another chapter of this story and I'm looking forward to the challenge," he said. "Labour Day is probably (going to be) the most interesting it's ever been in years."