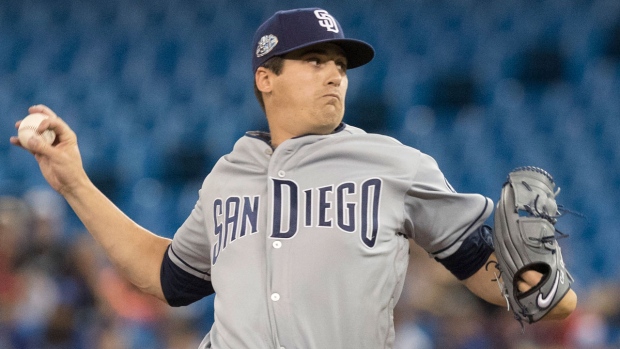 San Diego Padres starting pitcher Cal Quantrill throws against the Toronto Blue Jays during the first inning of their interleague MLB baseball game in Toronto on Saturday May 25, 2019. THE CANADIAN PRESS/Fred Thornhill

In his fourth career start, the 24-year-old native of Port Hope, Ont., tossed a two-hitter, struck out nine, walked two and gave up three runs in six innings as his teammates banged out 20 hits and a franchise-record seven home runs.

Canadian left-fielder Josh Naylor, 21, also made a milestone with his first hit and first RBI in the majors. The native of Mississauga, Ont., lined a double off the centre field wall for San Diego to score leadoff hitter Greg Garcia and give Quantrill a first-inning lead.

Quantrill's win came against the team he cheered for as a youngster. His dad, Paul, was a reliever for the Blue Jays for six of his 13 major league seasons between 1996 and 2001. The younger Quantrill fondly recalled before the three-game series began on Friday his days of roaming the turf at Rogers Centre when his father played in Toronto.

He visited friends and family in Port Hope on Thursday, a day off for the Padres, before boarding a westbound hour-long VIA train ride to rejoin his teammates in Toronto.

He estimated close to 200 friends and family members were among the 24,212 in attendance at Rogers Centre.

Naylor also had plenty of local support. He made his major-league debut in the Padres' 6-3 win on Friday. But he went 0 for 4 as San Diego's designated hitter in that game.

Naylor went 3 for 6 in his second outing. After his double, he lined out to right field in the third inning, struck out in the fifth and sixth. He was awarded an infield hit and RBI in the seventh inning after rookie Toronto third baseman Vladimir Guerrero Jr. bobbled the chance and a third hit in the eighth, a slow-rolling single down the third-base line off the end of his bat.

Naylor hit second in the Padres batting order that produced two homers each from outfielders Will Myers and Hunter Renfroe.

Quantrill received a nice cushion from Myers and second baseman Ian Kinsler in the second inning. The two smashed back-to-back homers to left and centre fields, respectively. It was the first time San Diego hit successive home runs in 2019.

The game was busted wide open in the fourth inning when Padres catcher Austin Hedges belted his first career grand slam into the left-field seats.

This was the third start for Jackson since the Blue Jays acquired the 35-year-old right-handed starter earlier this month.

Quantrill yielded a home run to Blue Jays left fielder Lourdes Gurriel Jr. in the second inning and a two-run shot from Toronto's Justin Smoak in the fourth inning.

Notes: Fans began chanting "Let's go Raptors" as the Padres continued to increase their lead in the eighth inning ... Toronto catcher Luke Maile pitched a run-less ninth, fanning two of the five Padres he faced ... In his second career game, Blues Jays second baseman Cavan Biggio, son of Hall of Famer Craig, went 0-for-3. He's now hitless in six at-bats in his first two games ... Toronto has a dismal 6-17 record in May.