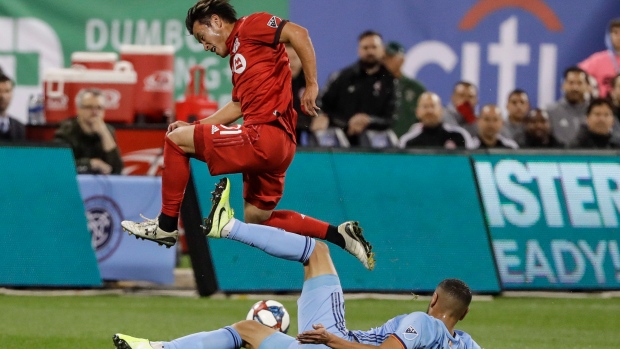 Toronto FC faces a familiar foe in New York City FC on Sunday in the round of 16 at the MLS is Back Tournament.

“Obviously the coach has changed this year (former Celtic boss Ronny Deila took over from Dominic Torrent) and with that some of their ideas and the way they go about things are a little bit different. But it's still a lot of the same players and I think it's still a team and a club that has the idea and has the identity of wanting to play football.”

There hasn't been much attractive football of late from the New Yorkers, who needed help from others to advance after a disappointing 1-2-0 group phase at ESPN's Wide World of Sports complex in the Orlando area.

“There's not many teams that played fantastic attacking football because of the circumstances,” said Deila, citing the oppressive heat and pitches that have taken a beating because of the number of games.

“We know we have skills that can win games for us,” he added. “That's what's positive for us.”

NYCFC lost 1-0 to Philadelphia and 3-1 to Orlando before edging Inter Miami 1-0 to finish third in Group A.

“I think after the second (loss), no one in the team really believed we were going to get through,” Swedish defender Anton Tinnerholm said. “After the second game, we had a big talk and we found out that we still have a chance.”

So they targeted the group stage finale, looking to at least get three points to add to their regular season total.

FC Cincinnati's 2-0 win Wednesday over the New York Red Bulls kept NYCFC tournament hopes alive. It all came down to Thursday and a 91st-minute penalty by Cristian Pavon that lifted the Los Angeles Galaxy into a 1-1 tie with the Houston Dynamo.

The result eliminated Houston from advancing and brought NYCFC out of the cold.

“We're happy to be here and now we have the opportunity to do something bigger.” Tinnerholm said.

“On Sunday, we've got nothing to lose,” he added. “We got a free ticket here. Now is the time to just go out there and push.”

Added Deila: “Toronto's a good team but they're definitely possible to beat.”

Toronto coach Greg Vanney says he expects the intensity level to be higher in the knockout rounds, given what's at stake and the fact the games will be played in the evenings - with no more morning kickoffs.

“For us, we have to raise our level in terms of the intensity and the speed at which we're doing things,” he said. “Staying more connected ... We've got to get it to another level if we're going to continue at this tournament.”

Toronto conceded two late goals in a 2-2 tie with D.C. United in its tournament opener before defeating Montreal 4-3 and tying New England 0-0 to win Group C.

“We have to do better than we have done in the games leading up to this. I think we will,” said Vanney.

Despite its less than stellar showing to date at the tournament, he believes NYCFC will pose a challenges.

“They have players who can make plays and who can hurt you.”

Revenge is on the New Yorkers' minds in the wake of being eliminated by Toronto in the 2016 and 2019 MLS playoffs after finishing second and first, respectively, in the Eastern Conference standings.

Not to mention a 1-0 defeat in Toronto's home opener March 7.

“We all know that Toronto is a good team, that they have experience,” he added. “It's a team that is hard to beat.”

Toronto star striker Jozy Altidore, who sat out the first two games of the tournament while working on regaining match fitness, made a cameo appearance off the bench in Tuesday's game against New England. He should be ready for more minutes.

Vanney said Canadian midfielder Jonathan Osorio, who has been sidelined by a quad issue, should be “ready to give us something in the game.”

Sunday's winner faces either the Portland Timbers or FC Cincinnati in an Aug. 1 quarterfinal.

This report by The Canadian Press was first published July 24, 2020.