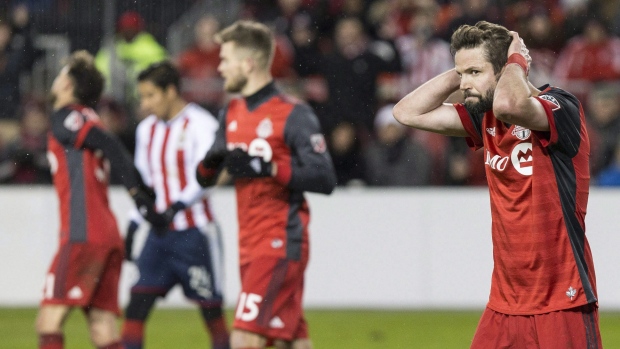 Nashville SC and Inter Miami CF will select up to five players each from the eligible player list.

Nineteen teams had to make players available. The Vancouver Whitecaps, D.C. United, FC Dallas, Houston Dynamo and New York Red Bulls are exempt by virtue of losing a player in the 2018 expansion draft.

The 19 participating teams were able to protect up to 12 players each from their roster. MLS homegrown players ages 25 and under, as well as Generation Adidas players who did not graduate from the program following the 2019 season are automatically protected.

The Generation Adidas program allows talented underclassmen to sign a contract with the league and enter the MLS draft early.

Teams can lose no more than one player in the expansion draft. But clubs can leave players unprotected and then make deals with expansion franchises not to pick them - or to re-acquire them if taken.

Wingers Nicolas Benezet, who joined Toronto in July on loan from French Ligue 2 side Guingamp, and Tsubasa Endoh were also left unprotected. Endoh came on in the second half of the season, winning a starting spot for Toronto.

The 28-year-old Morgan is Toronto's longest-serving player, having made his pro debut for the Reds in 2010 in the CONCACAF Champions League against Arabe Unido.

Telfer spent the season on loan with York 9 FC in the CPL while Bakero was loaned out to Phoenix Rising FC of the USL Championship.

Midfielder Omar Browne was also on Montreal's unprotected list although the midfielder returned from loan to Panama's C.A. Independiente de La Chorrera in August. The Impact retain his MLS rights.

Also on the Montreal unprotected list is Jeisson Vargas, a midfielder who spent the 2019 season on loan to Chile's Universidad Catolica.

Goalkeeper Clement Diop took over for Bush at the end of the season, ending his streak of 66 consecutive league matches. At 37, Fanni has been around the block a few times while Argentina's Urruti made a whopping US$1,071,000 this season for four goals and six assists.

The 26-year-old Jackson-Hamel had three goals in 16 games this season. He has won nine caps for Canada. The 36-year-old Sagna's distinguished resume included stints with Arsenal., Auxerre and Manchester City.

Star forward Zlatan Ibrahimovic, who has announced he is leaving MLS for greener pastures, was on the Los Angeles Galaxy's unprotected list.

Canadian Will Johnson and fellow midfielder Sacha Kljestan were made available by Orlando. Former Toronto goalkeeper Joe Bendik was left unprotected by Philadelphia while forward Joao Plata, another TFC alumnus, was not protected by Real Salt Lake.

Teams that lose a player in the draft receive $50,000 in general allocation money.

This report by The Canadian Press was first published Nov. 16, 2019.