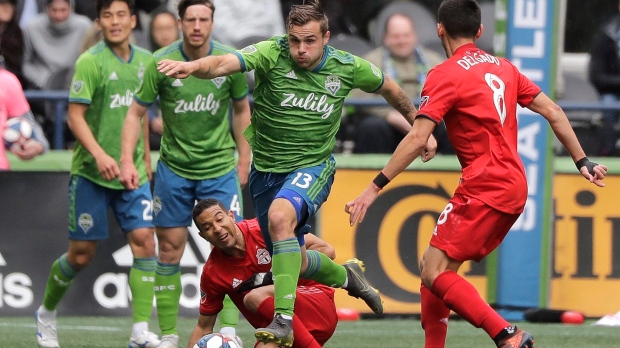 Seattle Sounders forward Jordan Morris (13) leaps over Toronto FC defender Justin Morrow, lower center, as he drives with the ball during the second half of an MLS soccer match, Saturday, April 13, 2019, in Seattle. The Sounders will play Toronto FC in the 2019 MLS Cup in Seattle on Nov.10. THE CANADIAN PRESS/AP/Ted S. Warren

Toronto FC returned to training Saturday, putting its Atlanta celebrations behind it. The focus now is on a familiar MLS Cup final foe in the Seattle Sounders.

“We had our night to enjoy the Eastern Conference championship. Now it's all back to business,” said midfielder Nick DeLeon, who scored the winning goal in Toronto's 2-1 win over Atlanta United FC on Wednesday. “We're 100 per cent focused on getting bodies right and focusing on Seattle.”

The Nov. 10 showdown at CenturyLink Field marks the third MLS Cup meeting between the two teams in the last four years.

Seattle won in 2016, winning a penalty shootout after failing to put a shot on target during the game. Toronto avenged that loss in the 2017 championship match, winning 2-0. Both contests were at BMO Field.

“I think really it's incredible for two teams now in the league, with 20-plus teams, to find their way back through both conferences three times out of four years,” said Toronto coach Greg Vanney. “There's really something special to that.”

The Los Angeles Galaxy have done it twice - once while Vanney played for them - with D.C. United and New England Revolution also making three finals in four years. Now Seattle and Toronto join them.

“That's a big feat,” Vanney added. “And for two teams (in the same season) to be able to do that is really special.”

Both teams have sparkling resumes, although it took Toronto a while to turn around the product on the field after joining the league in 2007. TFC did not make the post-season until 2015.

Seattle, which came on board in 2009, has never missed the playoffs.

“It means something. It shows the consistency of the clubs in the last four years and what it means to be a top club in this league,” said midfielder Jonathan Osorio. “All three times that we've made it to the MLS Cup, we've done it different ways. So it's pretty amazing. I think Seattle has done it different ways as well.

“The two clubs just find a way to win big games and that's what matters in professional sports.”

TFC is in no hurry to get to Seattle, electing to fly in Thursday for the Sunday game.

“Our choice was Wednesday or Thursday,” said Vanney. “And our players are very comfortable in our setting and everything that we have here. Obviously privacy as you prepare for things is a good thing.

The extra time will also allow star striker Jozy Altidore more time to recover from the quad strain that has kept him out of the three previous playoff games. Altidore worked out with a trainer away from the rest of the team Saturday in the portion of training open to the media.

The big man has not played - or dressed for a game - since the Oct. 6 regular-season finale.

Vanney said he hopes Altidore can resume training with the full group in the next few days.

“The more fitness and high-speed running and those type of things that we can get him, then the more prepared he will be ... And the better fitness we can give him, the more minutes he'll be capable of playing.”

For the second game in a row, Omar Gonzalez dressed but did not see action in Atlanta with Laurent Ciman taking his role. Vanney said the centre back was healthy but was held back because he hadn't had many high-intensity training sessions.

Gonzalez could have played, the coach added. But he thought he needed his subs at the other end of the field.

This report by The Canadian Press was first published Nov. 2, 2019.