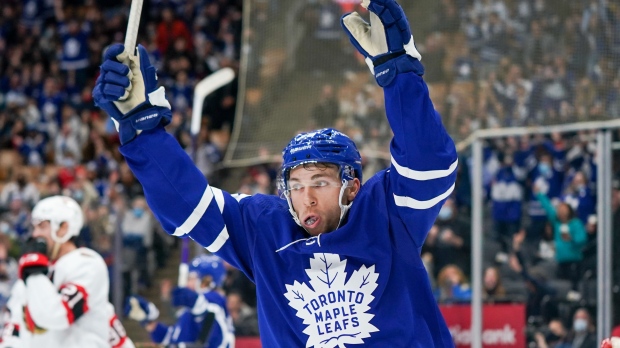 TORONTO - Alexander Kerfoot had a goal and an assist while Michael Bunting scored his first for his hometown team as the Toronto Maple Leafs defeated the Ottawa Senators 3-1 on Saturday night.

Wayne Simmonds had the other goal for Toronto (2-1-0), which got 20 saves from Jack Campbell.

Josh Norris replied for Ottawa (1-1-0). Anton Forsberg, who made 46 stops in Thursday's 3-2 victory over the Leafs in the nation's capital, finished with 26 saves.

Attendance at Scotiabank Arena was announced at 18,211 - the second straight home date short of a sellout.

Toronto was forced into an uncomfortable situation behind Campbell with fellow netminder Petr Mrazek (groin) and defenceman Justin Holl (illness) both sidelined Saturday.

Pressed tight to the NHL's salary cap - which remains stagnant at US$81.5-million because of the COVID-19 pandemic's economic fallout - the Leafs didn't have enough room on their books to recall No. 3 option Michael Hutchinson from the minors without sending someone down and playing with 17 skaters.

Faced with that option, the club instead signed University of Toronto goalie Alex Bishop, who played three seasons in the Quebec Major Junior Hockey League, to a one-day amateur tryout to serve as Campbell's backup.

The Leafs got off to sluggish starts in both of their previous games, including a 3-2 home victory over the Montreal Canadiens on opening night. But they were on the front foot early against Ottawa.

Simmonds opened the scoring just 2:12 into the first period after Toronto won an offensive zone faceoff. Rasmus Sandin took a pass from defence partner Travis Dermott and rotated down low before feeding the bruising winger at the top of the crease.

The home side doubled its lead at 8:06 when William Nylander, who has points in all three of the Leafs' games, stole the puck from Ottawa rookie Shane Pinto down low. He fed it in front to Kerfoot, who made no mistake on Forsberg.

Toronto defenceman Morgan Rielly hit the post early in the second before Forsberg robbed John Tavares with a terrific glove save later in the period.

The Leafs then got a 5-on-3 power play for 66 seconds, but the Senators netminder denied Tavares on a one-time effort.

Chances were few and far between for Ottawa, which trailed 53-30 in shot attempts through two periods. But Tim Stutzle nearly made 2-1 on a terrific individual effort only to be thwarted Campbell.

The Senators finally broke through on a late power play when Tyler Ennis won a battle and Drake Batherson found Norris in front.

Batherson appeared to even things up with five seconds left in period on a breakaway that saw his initial shot rebound off Campbell, off the Ottawa forward's leg and in. But Toronto correctly challenged for offside.

Mitch Marner hit one of Forsberg's posts on a break of his own five minutes into the third before Chris Tierney found iron at the other end moments later on a deflected shot.

Bunting finally gave the Leafs some breathing room at 7:57 after taking a pass from Kerfoot on a 2-on-1. The opportunity looked to have evaporated with Ottawa getting numbers back, but the Toronto native stayed with the play and fired home his first in blue and white.

This report by The Canadian Press was first published Oct. 16, 2021.