Andersen stellar as Leafs down Knights 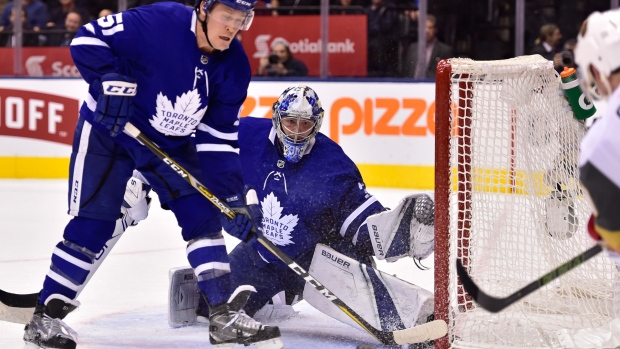 Connor Brown, Mitch Marner and Nazem Kadri, into an empty net, scored for Toronto (10-5-0). Brown also had an assist.

Cody Eakin replied for Vegas (6-8-1), which got 18 stops from Marc-Andre Fleury.

The Knights were by far the better team through two periods and had a couple of opportunities to tie the score early in the third down 2-1 only to watch Andersen shut the door.

Patrick Marleau nearly made it 3-1 for Toronto moments later off a pass from Kasperi Kapanen on a 2-on-1 rush, but the veteran flubbed his shot wide.

The Knights, who got winger Max Pacioretty back from an upper-body injury but are still without centre Paul Stastny, lost another forward when Erik Haula went down with an apparent right leg injury five minutes into the third.

Haula, who collided with Marleau along the boards, stayed down for a few minutes as he was attended to by the medical staffs of both teams before being stretchered off.

The Knights' power play, which came in ranked 28th, got a chance with under nine minutes left in regulation when Jake Gardiner went off for slashing, but was unable to find the range on Andersen.

Fleury made a nice stops on Marner and John Tavares before Andersen stopped a Rielly Smith effort from the goal line with his arm and body with 2:33 left.

Vegas kept its foot on the gas with Fleury on the bench for an extra attacker, but couldn't get much in the way of pressure before Kadri scored his fourth into an empty net with 34.1 seconds left.

Coming off Saturday's dominant 5-0 victory over the Pittsburgh Penguins that saw Andersen stop 31 shots to snap a two-game slide, the Leafs went up 2-0 just nine seconds into the second period.

Tavares stole the puck from William Karlsson at the Knights blue line before feeding Marner, who beat Fleury high over the blocker for his fifth goal of the campaign.

So far unable to recapture the magic of its expansion-season run to the Stanley Cup final through the first five weeks of 2018-19, Vegas dominated the period from there.

After both Brad Hunt and Shea Theodore found iron on blasts from the point, the latter fired a shot that Eakin tipped past Andersen for his fourth at 11:22 just as the Leafs goalie was reaching with his glove to make the save.

The Knights' 30th-ranked attack, which came in averaging a paltry 2.29 goals per game after putting up an average of 3.27 last season, kept coming, with Andersen stopping Haula on a 2-on-1 break.

Haula had another chance at the side of the net as the Leafs tried desperately to hang on as wave after wave of Knights forwards darted around the offensive zone.

Fleury had to flash his glove at the other end on Andreas Johnsson and watched Kapanen whiff on a great chance before Ryan Reaves hit the post - the visitors' third of the period - on a shot that nicked off Andersen in what might have been Toronto's worst 20-minute stretch of the season.

Vegas led 29-16 on the shot clock through two periods and held a 61-28 edge in attempts directed towards goal.

The Leafs entered play just 3-5-0 at home, including losses in four of their last five in Toronto, and had gone five straight at Scotiabank Arena without scoring in the first two periods, but Brown put an end to that ugly streak at 5:30 of the first.

The winger picked the pocket of Knights defenceman Nick Holden in the slot before firing a quick shot up and over the glove of a surprised Fleury for his second goal, snapping a 10-game drought.

Pacioretty returned to the lineup after missing four games with an upper-body injury suffered Oct. 26. The former Montreal captain was acquired in a blockbuster trade with the Canadiens prior to the start of training camp.

Pacioretty, who signed a four-year, US$28-million contract extension with the Knights that kicks in after the deal was announced, will make his return to the Bell Centre in Montreal on Saturday.

Notes: Brown's only other goal this season was into an empty net. ... Stastny (lower-body injury) is expected to be out another month. ... The Leafs host the New Jersey Devils on Friday before visiting the Boston Bruins on Saturday. Toronto then heads west for games against the Los Angeles Kings, San Jose Sharks and Anaheim Ducks next week. ... Vegas is in Ottawa on Thursday to take on the Senators ahead of Pacioretty's return to Montreal.