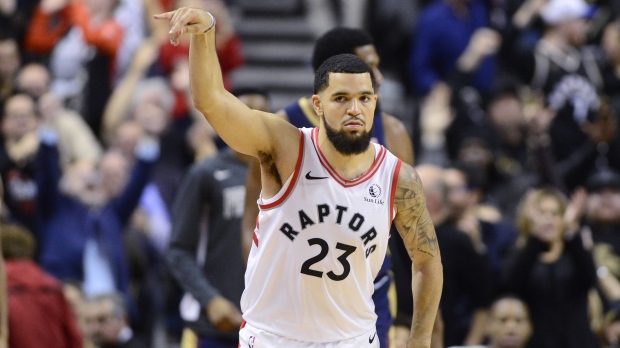 TORONTO - Fred VanVleet would prefer nobody noticed the major minutes he's been logging this season.

The Toronto Raptors guard is averaging a career-high 37.8 minutes as a starter through six games, 10 minutes more than he played coming off the bench last year.

“I don't really want to talk about the minutes because people read the news, coaches included,” VanVleet said smiling. “And I'm happy, and if I can play 48 I'll play 48.

“So I'm feeling good. I'm not ignorant to the fact that it probably has an effect (on his body) but it's my job to be ready to go every night and I feel like I've been doing that.”

Kawhi Leonard made load management part of the Raptors' lexicon last season. And while he's long gone from Toronto - apart from the framed photos of last season's historic championship run that adorn the walls of the team's practice facility - the term remains a hot topic, not merely with the Raptors but around the league.

Canadian RJ Barrett leads the league in total minutes, almost unheard of for a rookie. New York Knicks coach David Fizdale lashed out at reporters who questioned putting the Mississauga, Ont., native back into the game for garbage time of a 113-92 blowout loss to Sacramento on Sunday.

“We got to get off this load-management crap,” Fizdale fumed. “Latrell Sprewell averaged 42 minutes for a season. This kid is 19. Drop it already.”

Raptors coach Nick Nurse has been riding his starters heavily. Kyle Lowry is averaging 38.8 minutes, also a career high. So four days off between games - the Raptors don't play again until they host Sacramento on Wednesday - provided a welcome break.

“We can always use a little extra time to regroup,” Nurse said. “We're still playing a pretty short rotation and some heavy minutes. I think it's beneficial for us right now.”

Asked where he stands on load management this season, Nurse said: “We're still trying to find our way, most coaches. I don't look at too many stats of where we are on that. I imagine we have a couple of guys right near the top. . . It will settle in once we get going.”

Barrett, and Fizdale's comparison to Sprewell, were clearly hot button topics on Monday. Both Nurse and VanVleet mentioned them after Monday's practice at OVO Athletic Centre.

But both said load management is unique to each player.

“Managing minutes has been going on in this league since the beginning of time. Some guys like Latrell Sprewell can play 41 minutes a night and some guys can't,” VanVleet said. “It's case-by-case, team-by-team. I don't think it's something that we can just throw a net across the entire league and put everybody in the same pool and say it's load management.”

Load management isn't merely sitting out the odd game. It's also what happens behind the scenes.

“That's the important part,” VanVleet said. “Playing a game, it's just what I do for a living. If I come in here the next day and run up and down, run sprints for two hours, I probably will be tired pretty fast. But you get treatment, you rest, you cold tub, you ice, you massage, you stretch, you yoga, pilates, lift weights - whatever it is for that person.

“For me, it's a combination of many different things to get back as close as you can for the next game, then you try to get back to your ceiling and go out there and lace it back up again.”

Nurse said the days in between games are different for the players logging heavy minutes than for the backups. That was obvious on Monday as the backups were still going hard long after the starters had left the court.

“You're trying to get back as much as you can in the days in between,” Nurse said. “Even today, with the game a couple of days away, you're not into contact with most of those front line guys who are playing heavy minutes. That's where you're trying to recoup it all.”

Tip-ins: Nurse said Patrick McCaw was seeing a specialist on Monday, but was out indefinitely with knee soreness. “He's doing OK,” said Nurse. “He's got another look today to see what's troubling him.”