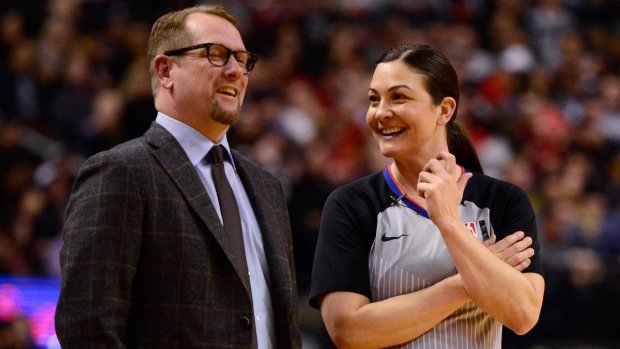 TORONTO - Nick Nurse's ability to roll with the roster punches goes back to his D League days, when he rarely knew from one game to the next which players he'd have in uniform.

And so it wasn't surprising that Nurse met Tuesday's news that Serge Ibaka was sick with a shrug, and a quick adjustment.

Nurse and the Toronto Raptors have made adjusting on the fly an art form this season, rolling to a franchise-record and league-leading 15 consecutive victories despite being among the league's top five teams in games lost to injuries.

“We haven't played great all the time (during this streak), but we keep finding a way and that's a heck of a characteristic to have,” Nurse said.

The Raptors beat the Minnesota Timberwolves 137-126 on Monday for their 15th consecutive win. That topped the Calgary Stampeders, who won 14 straight in 2016, for the longest single-season win streak from a major Canadian-based professional team (NBA, NHL, MLB, CFL and MLS).

The Raptors are 40-14, a franchise record for 54 games despite the mounting injuries and losing superstar Kawhi Leonard and starter Danny Green to free agency in the summer, and go for No. 16 when they play the Nets (24-28) on Wednesday in Brooklyn.

But don't mention “streak” to the players, who've said it's been tough to avoid with all the social media buzz.

“Day by day man,” Kyle Lowry said after a recent win. “Day by day, game by game, hour by hour, minute by minute. We don't think about no streaks, we just think about the next game.”

Ibaka's absence Monday to illness was unexpected. But the Raptors have mastered the next-man-up game, and so in the absence of its two centres - Ibaka and Gasol - the Raptors started Rondae Hollis-Jefferson who gave up six inches to the Minnesota's Karl-Anthony Towns.

“We didn't have a whole lot of other options,” Nurse said on the last-minute adjustment.

While the Raptors have been effective at making in-game adjustments, Nurse chalks up much of the win streak to hustle.

“I think these guys have proven enough that they can win,” he said. “We've have a lot of injuries this year, but they just keep stepping up and playing and we've just gotten used to it. You at least have to go out and give a great effort, give yourself a chance to win, and don't let them play harder than you. If you think you're under-talented or undersized or whatever, then you've got to take your energy and toughness up a notch and think we've done that most nights.”

There's an aura of confidence around the players that is partly a holdover from last season's historic post-season run.

“I think it's in the players right?” Nurse said. “They come out and they take it to you, from Kyle to Pascal (Siakam) and Fred, all the way to Rondae, OG (Anunoby), Pat, Terence (Davis). Lots of guys come out there and try to execute the offence the best they can and take what's there. They find a mismatch and they go to it, over and over. Try to guard people. They might think somebody is too short, too slow, but they go out and give the effort.”

Raptors fans were in an uproar when Davis was left off the roster for the this weekend's Rising Stars game as part of the annual NBA All-Star festivities.

The undrafted rookie has scored in double figures in four of the Raptors' last five games, including a career-high 31-point performance against Chicago.

Davis was trending on Twitter on Tuesday thanks to outraged Raptors fans after the league announced Colin Sexton had been named an injury replacement for Tyler Herro on the U.S. Rising Stars team.