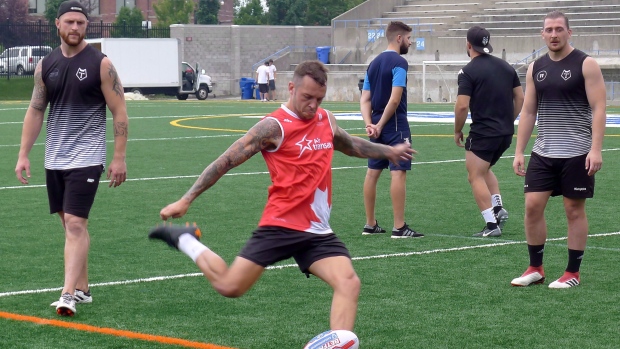 TORONTO -- Gareth O'Brien is not the biggest member of the Wolfpack but the divot missing from the fullback's forehead is a vivid reminder of his commitment to the Toronto cause.

Surprisingly the welt did not come from last week's physical encounter in Salford where O'Brien took a beating in a 28-16 loss to the Red Devils. The injury was more friendly fire, it seems.

"No, that's from this pitch here," said O'Brien, pointing to the new artificial turf at Lamport Stadium. "Against London (two games ago)."

The Wolfpack, who host France's Toulouse on Saturday as their Super League promotion push continues, have put their bodies on the line all season. And rugby league, where gang tackling and high-speed collisions are a norm, can take a toll.

Toronto wingers have had the worst of it recently.

Liam Kay, out for the season with an ankle injury, watched practice this week in a walking boot with crutches nearby. Adam Higson is running but avoiding contact after a plate inserted to correct a shoulder injury bent. Matty Russell is back in England getting some heavy-duty dental repairs.

Centre Greg Worthington is done for the season with a knee injury. Prior to that he had a concussion, which necessitated one of Toronto's trainers chasing him mid-game to ensure he came off for a head injury assessment.

Against Salford last week, a towel and roll of tape stemmed the flow of blood from an Andrew Dixon head gash in the kind of triage that would do an army medic proud.

At practice, with players stripped down under the hot sun, more than a few Wolfpack joints are wrapped in tape.

As the last line of defence, O'Brien takes more than his fair share of abuse. Teams routinely end running attacks with moonshot kicks that spiral down towards the fullback like a torpedo as giant men converge at high speed.

Wolfpack coach Paul Rowley, a former England hooker, says rugby league collisions are like "car crashes." And top teams have tackling down to a fine art, with as many as three or four players grabbing a limb and hurling the ball-carrier to the ground.

When done well, such tackles are quick and violent, with several hundred pounds of chiselled beef on top of the ball-carrier ensuring that other defenders have time to take their position.

The 26-year-old O'Brien had to be helped off the field in the dying seconds of the Salford match when he was caught by a swinging arm from Jackson Hastings after corraling a high ball. The cheap shot earned Hastings a two-game suspension.

"Whether he intended to whack me around the head, I don't know," said O'Brien, a native of Warrington, England, who is known around the team as Gaz. "He apologized after the game and I said 'Let's just leave it on the field.' These kind of things happen."

"The boys will always have their usual aches and pains and stuff like that (after games)," said O'Brien, who is listed at six foot and 178 pounds. "I'm not the biggest. I'm probably not involved in as many collisions as the bigger boys in the middle, but with my slight frame I feel every single one.

"But the adrenaline gets you through. It's the next day you feel a bit sore. But that's just how our sport is. I wouldn't be playing it if I didn't enjoy it."

The Wolfpack (2-2-0) stand fourth in the Super 8s Qualifiers ahead of London Broncos and Toulouse (also 2-2-0) on goal difference.

The playoffs group the bottom four teams in the elite Super League (Leeds Rhinos, Hull Kingston Rovers, Salford and Widnes Vikings) with the top four teams from the second-tier Betfred Championship (Toronto, London, Toulouse and Halifax RLFC) won this year with a 20-2-1 record.

After playing each other once, the top three teams secure Super League status with No. 4 playing No. 5 in the so-called "Million Pound Game" to see who joins them.

"They can be magical or they can go wayward ," Rowley said of the French visitors.

The promotion/relegation format will change next season with the Rugby Football League Council voting to remove the Super 8s playoffs for the 2019 campaign.

The top Championship team will earn promotion while the bottom Super League side will be relegated. After the regular season, the top five Super League teams will meet in a playoff series culminating in a Grand Final.