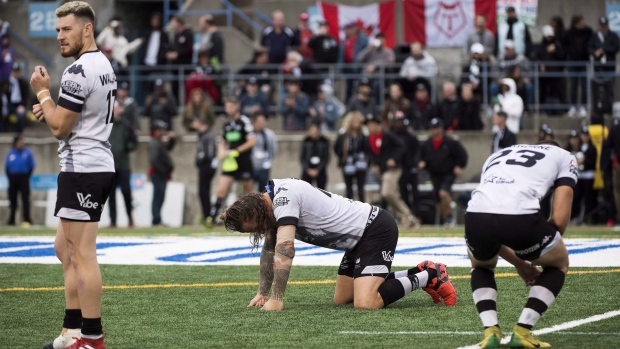 Toronto Wolfpack players react after losing to the London Broncos during second half rugby league action in Toronto on October 7, 2018. The Toronto Wolfpack's feel-good rise through the ranks of world rugby league hit a road bump in December when the transatlantic team missed payroll. But majority owner David Argyle says the payroll was only delayed, with the original ownership group stepping in. And Argyle says short-term pain has led to long-term gain with the club strengthened by a new $10-million investment that helps the bottom line now and in the future. THE CANADIAN PRESS/Nathan Denette

TORONTO - The Toronto Wolfpack's feel-good run through the ranks of world rugby league hit a road bump in December when the transatlantic team missed payroll.

But majority owner David Argyle says the payroll was only delayed, with the original ownership group stepping in. And Argyle says short-term pain has led to long-term gain with the club strengthened by a new $10-million investment that helps the bottom line now and in the future.

“We're in a much better state now because we've had to really focus on the sustainability side,” he said in an interview Sunday.

“We've figured out the commerciality and the sustainability of the club,” he added.

The new investors are Canadian companies whose ties to the franchise will include Wolfpack-branded products in the isotonic beverages, alcohol and wellness areas as well as the injection of cash.

Argyle declined to identify the companies at this stage, saying he is awaiting the proper paperwork given two are publicly listed on Canada exchanges.

The Wolfpack-branded product lines are expected to launch in the first quarter with distribution to more than 40,000 outlets in Canada, the U.S. and Europe as well as online. The deal includes a revenue-sharing agreement that will help secure the club's future, according to Argyle.

The payroll was supposed to be made in the third week of the month. Argyle said the original ownership group stepped in to make a “substantial payment,” adding that all payroll issues will be squared as of Monday.

He cited a volatile economy in the fourth quarter for making it “tough to create additional liquidity.”

“It wasn't from a lack of will or want ... We always knew when we started this thing, it would be a couple of years to build the brand,” he said. “And then we would have to round out the sustainability side.”

The Wolfpack won England's third-tier League 1 in the club's inaugural 2017 season and topped the second-tier Betfred Championship in 2018. Toronto missed automatic promotion to the Super League on points difference before losing a promotion playoff dubbed the Million Pound Game 4-2 to London Broncos on Oct. 7.

The team has been a roaring success on the field, with a 53-7-3 career record. That success has helped draw a loyal following to its Lamport Stadium home, although the franchise has not been shy about giving out tickets in its early stages.

As the lone North American team in the largely English league, Toronto faces unique challenges. Missing out on promotion to the top tier likely didn't help.

Under its current agreement with the Rugby Football League, Toronto has to pay for the travel and accommodation costs of visiting teams - a burden eased by its sponsorship deal with Air Transat.

The Wolfpack will work under a salary cap of two million pounds ($3.4 million) in 2019.

Revenue currently comes from tickets, sponsorships and merchandise sales, with the new investment deal expected to boost the numbers.

Unlike English clubs, the Wolfpack also do not get a cut of the league's TV deal.

The team currently pays for TV production of its home games as it strives to build its brand. It says its games reach 150 million homes across 19 countries. Argyle says staging the Million Pound Game cost $250,000 in production and other costs.

The Wolfpack's original ownership group featured 15 investors, seven of whom have serious stakes. Argyle, who remains the team's chairman, say all remain involved.

“This is basically more money coming in,” said Argyle, a Toronto-based Australian who works in the mining, energy and agriculture sectors.

Argyle said the temporary shortfall had nothing to do with the recent announcement that the Wolfpack had bought a minority stake in the third-tier London Skolars. The cash component of that deal comes down the line, he said.

The Wolfpack are currently preparing for the new Championship season at their training camp in Manchester.

Toronto, under new coach Brian McDermott, will open the season Feb. 3 at the newly promoted York City Knights and play its first 11 games on the road.

The home opener at Lamport Stadium is April 28 against Swinton Lions.