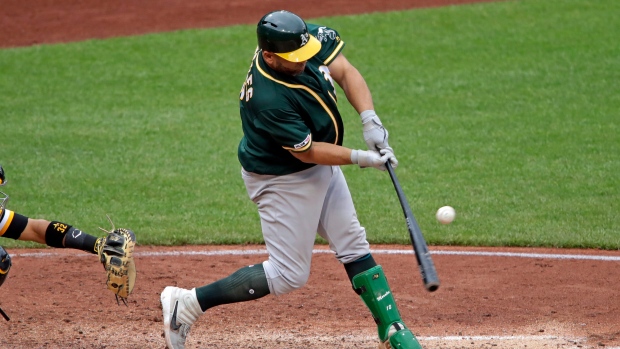 Oakland Athletics' Kendrys Morales drives in a run with a single off Pittsburgh Pirates relief pitcher Tyler Lyons in the 13th inning of a baseball game in Pittsburgh, Sunday, May 5, 2019. (AP Photo/Gene J. Puskar)

As part of the deal announced Tuesday night, the Yankees will send Oakland a player to be named or cash.

Oakland acquired Morales from Toronto on March 27, and the Blue Jays agreed to send the A's $11,445,000 as part of that swap. The 13-year major league veteran appeared in 34 games. A switch-hitter, he batted .204 with one homer and seven RBIs before being designated for assignment Monday.

The Yankees added Morales a day after putting Miguel Andujar back on the injured list with a small labrum tear in his right shoulder. New York has 13 players on the IL, and Andujar had been the Yankees' best remaining fit at designated hitter.

Morales is in the final year of a $33 million, three-year contract.