OTTAWA - Booze heists are on the rise at Ontario's liquor stores -- and a sagging economy may be partly to blame.

The Liquor Control Board of Ontario says "product shortages" for the last year were up by close to $1 million, to $6.5 million.

Some of the so-called shrinkage at the agency's 607 stores is being pegged to fumbled inventory counts, broken bottles or short shipments from warehouses.

But the LCBO has also seen a rise in thefts that may be linked to the manufacturing province's sour economy.

"Tougher economic conditions, as we started to experience in 2008-09, can lead to increased incidents of shop theft and break and enters," said spokesman Chris Layton.

"Increased shrinkage resulting from such activities would be most noticeable at our largest stores."

The documents show stock shrinkage increased in the 2008-2009 fiscal year to .18 per cent of net sales, from .16 per cent the year before. Layton said that marks the highest level over the last decade.

The shortages are much lower than for the general retail industry, which recorded inventory losses of about one per cent for 2008, according to the Retail Council of Canada.

But the council also says retailing losses were down sharply last year from the 1.25 per cent recorded in 2007. They were rising at the LCBO over the same period.

For example, only four liquor stores registered losses greater than $70,000 in 2007-2008, but the number jumped to 15 stores the following year -- most of them large outlets in the Toronto area.

The top loser by dollar value was an outlet in Woodbridge, Ont., which saw shrinkage of $200,000.

But when measured by percentage of sales, a Toronto store on Laird Drive appears to be the worst offender among the big outlets, with stock worth .7 per cent of net sales vanishing.

Layton said bookkeeping errors are likely behind most of the losses, though "a detailed analysis of shrinkage has yet to be concluded."

Layton says the measures have helped to reduce violent robberies, such as break and enters, but have also significantly increased the number of thefts being reported.

"There have been investigations related to shortages at certain LCBO stores," he said in an email, without providing details.

"These investigations are either ongoing or before the courts."

"Well-trained employees ... understand the importance of maintaining a presence in the customer floor area," Roy Ecker, senior vice-president of retail operations, said in an internal report from April.

The agency expects its net sales to dip in the current fiscal year by 2.5 per cent because of the weak economy.

Ontario's 607 liquor stores are seeing more of their inventory vanish, some of it because of theft. A list of the 10 Liquor Control Board of Ontario stores with the worst losses, by dollar value, for the year ending March 31, 2009:

List of 10 Ontario liquor stores with most inventory `shrinkage' 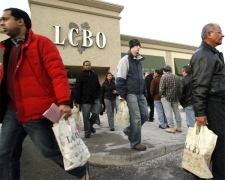 Patrons line up to get into an LCBO outlet as others leave after stocking up on beverages in Mississauga, Ont. on Monday, December 31, 2007. (J.P. Moczulski / THE CANADIAN PRESS)