With two weeks to go before election day, the Tories continue to hold on to a double-digit lead over the Liberals, according to the latest poll conducted by Nanos Research.

The daily tracking poll, conducted exclusively for CP24, CTV and the Globe and Mail, finds the Conservatives with the support of 39 per cent of decided voters.

Of the 991 people who were surveyed between Friday and Sunday, 29 per cent back the Liberals, while 17.4 per cent support the NDP.

The Bloc Quebecois has the support of 8.6 per cent of respondents, while about three per cent support the Green Party.

Seventeen per cent of people who were surveyed haven't decided who they are voting for.

Where are the leaders?

Harper is starting his day in Yellowknife before heading to Thunder Bay, Ont., for an evening rally with supporters.

Ignatieff, meanwhile, is speaking in Dettah, N.W.T., in the morning and then attending a barbecue in Yellowknife.

NDP leader Jack Layton continues to focus on ridings in Quebec as he makes stops in Quebec City and Val d'Or. 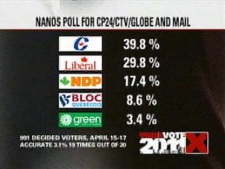 The Tories continue to hold a 10-point lead over the Liberals, according to the latest Nanos Research daily tracking poll released Monday, April 18, 2011.