TORONTO - A 34-year-old Toronto man plans to indulge his passion for motorbikes and muscle cars after winning a $50-million Lotto Max jackpot.

Timothy Schell picked up his prize Tuesday after checking his numbers online when he arrived at work in the morning.

Schell -- an electrician who is originally from Alberta -- says he loves cars and bikes and will likely spend some of his newfound riches on that hobby.

He had been house-hunting with his girlfriend over the long weekend but says he can now budget for a dream house.

Schell says he doesn't usually play the lottery but a gas station cashier talked him into buying a ticket for Friday's draw. It was a quick-pick.

He says he has no immediate plans to quit his job since he enjoys working.

"I'm the same guy -- I'll just have more toys," said Schell, who has been working in Toronto for about two years.

"I'm a hot-rod man. I love fast bikes, muscle cars and big trucks," said Schell, who showed up at the prize centre in downtown Toronto wearing a Harley Davidson T-shirt.

"I also look forward to visiting all of the major bike and car shows around the world."

Schell, who called his win "awesome" and a "total shock," said he also plans to share some of his good fortune with his family and friends. 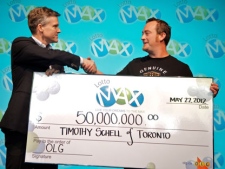