Toronto District School Board trustees are lifting a ban that prevents students from using cellphones and other gadgets in schools.

In a vote early Thursday, trustees decided to ease the four-year-old ban, starting with the new school year in September.

The policy will be amended to give teachers the final say on whether cellphones would be used during classroom learning and teaching.

Under the existing policy, students are allowed to bring a cellphone to school as long as it remains in a knapsack, jacket or locker.

With the change, students will be allowed to use their phones outside class in areas such as hallways as long as they don't disrupt classes or school activities.

Trustees said technology has evolved since the ban was implemented and cellphones can be used as a tool to enhance student learning and curriculum delivery.

The cellphone ban was implemented in 2007 because trustees believes cellphones caused disruptions in school and could be used for cheating. 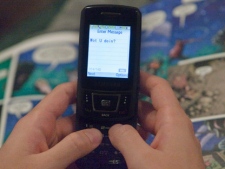 A text message is sent on a mobile phone. (THE CANADIAN PRESS/Ryan Remiorz)