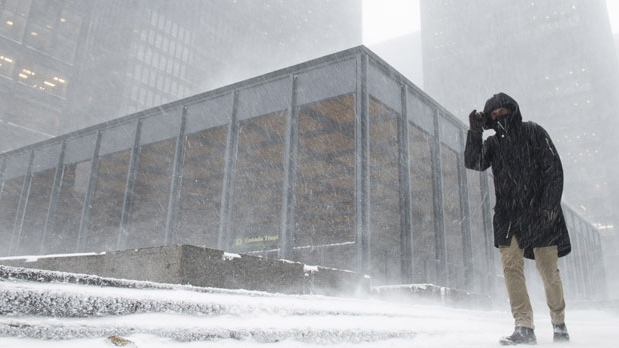 The GTA and much of southern Ontario could be in for another bout of messy weather with a winter storm system expected to hit the region Tuesday.

According to a special weather statement issued by Environment Canada for Toronto and most of southern Ontario Sunday, significant snow, freezing rain, and strong winds could be on the horizon.

“A low pressure system brewing over the Southern Plains States may intensify into a winter storm as it tracks over Southern Ontario Tuesday,” the agency said in its statement. “Snow is expected to arrive Tuesday morning. The snow may change to ice pellets and freezing rain for a few hours Tuesday before changing back to snow by Tuesday night as colder air arrives in the wake of the low pressure system.”

The snow is expected to taper off to flurries on Wednesday.

Between five and 15 centimetres of snow and ice pellets are expected to accumulate in some areas, along with ice buildup from freezing rain.

The wind could make the messy weather even more hazardous.

“Strong and gusty easterly winds may cause low visibility in blowing snow before the snow changes over to freezing precipitation,” Environment Canada said.

The statement warned that the storm could have “a significant impact” on travel in the region.

The city will see a small taste of precipitation tonight, with two centimetres of snow expected overnight.

The expected storm Tuesday comes as the city sees a few days of relatively warmer weather.

A high of – 4 C was expected in Toronto Sunday. The warmer weather was enough to prompt the city to end an extreme cold weather alert which had been in place.

Tuesday will see a high of -2 C, though the wind chill will make it feel closer to -12.

On Tuesday, the city is expected to see a high of -1 C.

Bernard Otu walks down the middle of a road due to sidewalks being covered in snow after a heavy winter storm, in Toronto on Tuesday, January 29, 2019. THE CANADIAN PRESS/Christopher Katsarov