Kirilow's lawyer, Brendan Neil, says all charges are connected to the same type of allegation around the same time period, but he couldn't say whether or not they relate to new complainants.

Police allege Kirilow, 23, pretended to have cancer to raise money that she promised to give to charity, but kept the cash for herself.

The charges are before the court Tuesday and Kirilow is expected to attend.

The John Howard Society, a non-profit organization that assists people in trouble with the law, has been supervising Kirilow as part of the conditions of her release. 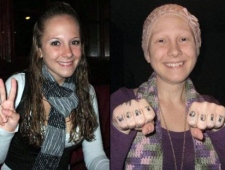 Ashley Kirilow, 23, has been charged with three counts of fraud under $5,000.