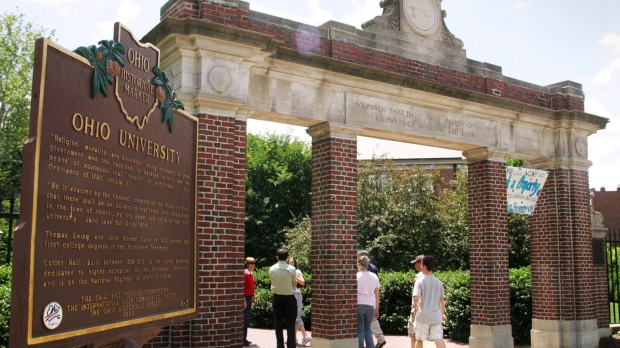 FILE - This June 12, 2006 file photo shows a gate with a historic marker on the Ohio University campus in Athens, Ohio. In October 2019, the university announced the blanket suspension of 15 fraternities in response to a hazing investigation on campus. (AP Photo/Joe Maiorana, File)

COLUMBUS, Ohio - The death of an Ohio University student and a related investigation into alleged hazing by fraternity members has led to charges against nine people, including two former students indicted for involuntary manslaughter and another for reckless homicide.

The Athens County prosecutor announced indictments Tuesday related to the death of 18-year-old freshman Collin Wiant last November and allegations about members of the fraternity he had sought to join.

An attorney for Wiant's parents, Rex Elliott, said the charges mark an important step in their broader quest to eliminate hazing and help others understand the costs of such behaviour.

“In order to affect change, there have to be consequences,” Elliott said.

Most of the defendants face drug- or alcohol-related charges, such as permitting drug abuse or trafficking in cocaine, LSD or harmful intoxicants. Five are charged with misdemeanour hazing.

Wiant's family has sued the Sigma Pi fraternity, alleging the teen from the Columbus suburb of Dublin died of asphyxiation after ingesting nitrous oxide provided to and forced on him by fraternity members.

The fraternity has denied those allegations and said Wiant wasn't a pledge at the time because he had been removed from the process weeks earlier. The university later expelled Sigma Pi for hazing, alcohol and drug use and other violations.

Seven of the defendants were members of Sigma Pi, according to The Columbus Dispatch, which has reported in detail on the case.

Two of the defendants are currently enrolled at the university, and six are former students, school spokeswoman Carly Leatherwood confirmed.

Court records listed no attorneys for the defendants as of Tuesday afternoon. At least one was scheduled to be arraigned Wednesday, and initial court appearances for some weren't yet scheduled.