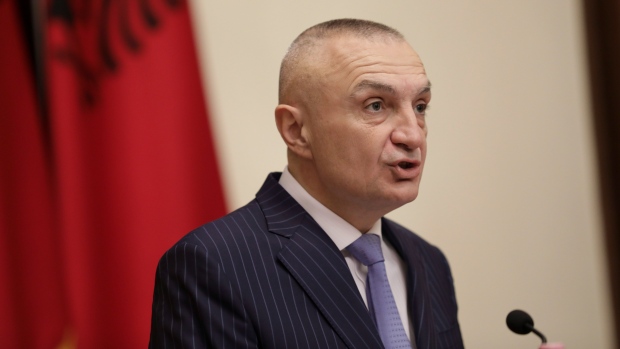 Lawmakers voted 100-7 in favour of the rebuke in a test of support for the governing Socialist Party, which has a comfortable majority in the 140-seat parliament but not the two-thirds needed for a no-confidence vote to oust the president.

Meta reacted to the vote by saying only the constitutional Court had the power to judge the legality of his actions. He dismissed the resolution as Socialist Party rhetoric that was “not serving at all to a crisis solution or social peace in the country.”

Meta said Saturday he was cancelling June 30 local elections because he feared the balloting would be “undemocratic” without participation of Albania's centre-right opposition parties.

The political opposition has led continuous protests since mid-February, accusing the government of links to organized crime and demanding a new general election. The Socialists have denied the allegations

The Socialist Party did not say whether its representatives would again seek to vote Meta out of office. Lawmakers spent hours Thursday debating a no-confidence motion out forward by party members, but ended up not calling a vote.

Socialist Prime Minister Edi Rama insists the municipal elections will go ahead as scheduled to prevent opponents from using political “blackmail” to force the calling of early parliamentary elections.

The prime minister has said the opposition protests have hurt Albania's prospects of launching full membership negotiations with the European Union.

“Ilir Meta has lost his right to stay at the president's office with our consent,” he said, adding: “There is nothing to shake us from holding the June 30 election.”

Meta said in a statement Thursday he stopped this month's voting for municipal offices “to avoid any possibility of provoking a destabilizing conflict that could result with consequences for the citizens' life and health, public security and the country's constitutional order.”

In a related development, the leader of the opposition Democratic Party said the prime minister had launched an investigation of allegedly suspicious spending abroad by the party during a parliamentary election two years ago.

The party has denied it. Next week prosecutors will question Basha and two other party officials about $650,000 the party is accused of spending in the United States through the lobbyist and a foreign company with offices in Scotland.

Democratic Party leader Lulzim Basha said he did not fear what he called a “political investigation” based on a “ridiculous accusation.”