Boy arrested after shooting that killed 4 in small Utah town 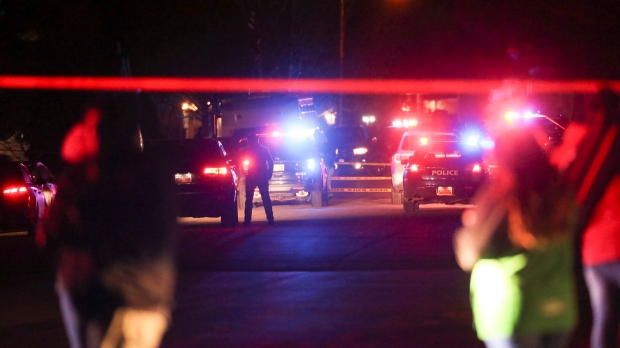 Police investigate after four people were killed and a fifth person was injured in a shooting at a Grantsville, Utah, home Friday, Jan. 17, 2020. The suspected shooter was taken into custody by Grantsville police, the Deseret News reported. Grantsville Mayor Brent Marshall said the victims and the shooter are all related, the newspaper reported. (Steve Griffin/The Deseret News via AP)

A boy armed with a gun killed three children and a woman inside a Utah home, then accompanied a fifth victim to a hospital, where he was arrested, police said Saturday.

Police were still trying to piece together who's who and what happened leading up to Friday night's shooting in Granstville. Investigators believe the victims are all related to one another.

“We're trying to make certain that we verify people's relationships among the deceased and the survivor,” Grantsville Police Cpl. Rhonda Fields told The Associated Press Saturday. “As for motive, we don't have any of that.”

It appears to be the largest mass shooting in Utah since 2007, when a shotgun-wielding gunman killed five people and himself at Trolley Square mall in Salt Lake City. It's also the first homicide in nearly 20 years in Grantsville, a town of 11,000 about 35 miles (56 kilometres) west of Salt Lake City.

“It's been a very long time,” Fields said.

The boy faces 10 charges, the most serious being aggravated homicide, she said. Police were not able to release his identity because he has been charged as a juvenile, and Fields declined to release any additional details about him.

Officials said he is the only suspect. His relationship to the victims was not immediately clear.

The names of the victims have not been released, and their identities may not be publicly known until Monday, Fields said.

Authorities have not been called to the house in the past.

Police responded to a call of shots fired inside at home at approximately 7 p.m. Friday. When officers arrived, they found the bodies of two girls, a boy and a woman, Fields said.

The shooter and a fifth shooting victim were gone, she said. Authorities later discovered that a person who arrived at the house after the shooting drove the suspect and the surviving victim to a nearby hospital, Fields said.

Officers arrested the boy at the hospital. He was being held at a youth detention facility.

The fifth victim had sustained a gunshot wound, was in stable condition and expected to survive, Fields said.

The person who drove them to the hospital was not involved in shooting, she said.

“It's an unfortunate tragedy that has taken place here this evening,” Marshall said. “Any time you have children involved in something, it becomes very emotional, very fast.”

“Parents and grandparents, secure your firearms! Everyone, hug your loved ones tight. And remember love, not hate, will heal broken individuals and families,” he wrote.