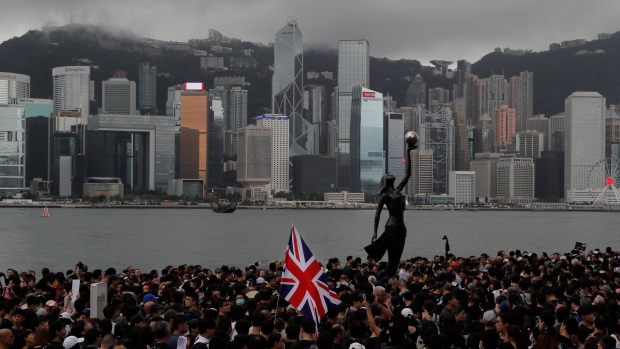 In this Sunday, July 7, 2019, photo, thousands of protesters carrying the British flag march near the harbor of Hong Kong. Hong Kong police on Tuesday confirmed it had received a report on Aug. 9, 2019, about a British foreign ministry employee who has been missing since crossing into China on a business trip. Local media reports have identified the missing man as Simon Cheng Man-kit, a trade and investment officer at the Scottish Development International section of the consulate. (AP Photo/Kin Cheung)

BEIJING - The British foreign ministry said it is “extremely concerned” about an employee of its consulate in Hong Kong who has been missing since crossing into mainland China on a business trip.

A statement from the Foreign and Commonwealth Office said it is seeking information from Hong Kong and Guangdong province about the fate of the employee, who was detained while crossing from the city of Shenzhen into Hong Kong.

Local media reports identified him as Simon Cheng Man-kit, a trade and investment officer at the Scottish Development International section of the consulate. The reports say he attended a business event in Shenzhen on Aug. 8 but never returned to neighbouring Hong Kong despite plans to do so the same day.

“We are extremely concerned by reports that a member of our team has been detained returning to Hong Kong from Shenzhen. We are providing support to his family and seeking further information from authorities in Guangdong Province and Hong Kong,” said the statement, which was forwarded by the British Embassy in Beijing.

It is unclear whether the man possessed a diplomatic passport, but the seizure of consular staff of any status or rank is highly unusual. Despite Beijing's declaration of a “golden era” in Sino-British ties, relations have grown tense in recent months amid pro-democracy protests in Hong Kong, a British colony for 156 years before its handover to Chinese rule in 1997.

The Scottish government said it was in contact with the Foreign Office about the case.

“We are aware of this incident and we are concerned for Mr. Cheng's welfare,” it said.

Asked about the case at a daily briefing on Tuesday, Chinese Foreign Ministry spokesman Geng Shuang responded, “I'm not aware of that.”

In response to questions about the case at a press briefing, Hong Kong police said officers were looking into it after receiving a missing persons report on Aug. 9 but cannot disclose more details because of personal data protection rules.

Chief Superintendent Tse Chun-chung said Hong Kong police haven't been notified about the case by mainland Chinese authorities under a mutual notification arrangement set up for such cases.

Press officers for the Guangdong police and Ministry of Public Security could not be reached by phone. The ministry did not immediately respond to faxed questions about the case.